A Defence of the Constitutions of Government of the United States of America. 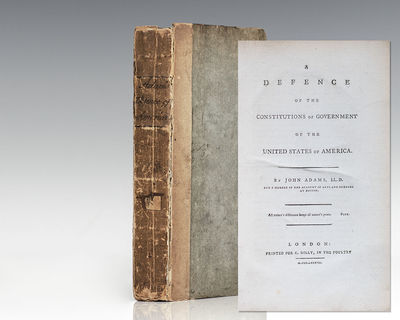 by Adams, John
London: Printed for C. Dilly, 1787. First edition of John Adams' landmark work. Octavo, original boards, minor wear. In very good condition. Housed in a custom half calf clamshell box. Rare, especially in the original boards. Adams wrote this work on constitutional theory while serving as Minister to the Court of St. James. It was a response to the liberal French statesman Turgot, who had criticized the new American state constitutions for their conservative economic framework. Adams's Defence was often cited in the debates of the Constitutional Convention. "A work marked by insight, breadth of views, conviction, courage, and--we may venture to add--much wisdom"--Larned, Literature of American History 2287. This volume was issued as a stand-alone work, and was followed by two supplemental volumes the next year. Howes A60 ("aa"), Sabin 234 (Inventory #: 50010)
$16,000.00 add to cart or Buy Direct from
Raptis Rare Books
Share this item