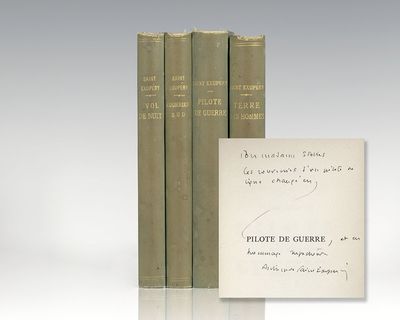 by Saint-Exupery, Antoine de
Paris: Librarie Gallimard, 1931-42. Early printings of Saint-Exupery's first four books. Octavo, four volumes bound in contemporary cloth. Each volume lengthily inscribed by Antoine de Saint-Exupery on the half-title page. In the author's first novel, Courrier Sud, "Pour Madame Stokes, Avec le hont que j'eprouve a signer ce pache de jeunesse. Et en respectueux hommages Antoine de Saint-Exupery." In his second novel, Vol de Nuit, which deals with his experiences as an airmail pilot, "Pour Madame Stokes, cher que'on retrouve une atmosphere de France en respectueux hommages Antoine de Saint- Exupery." In his third novel, Terre des Hommes, which went on to win the Grand Prix of the Academie Francaise, "Pour Madame Stokes, en souvenir d'une epoque recuse ou la Terr des Hommes etait en pix et en respectueux hommages Antoine de Saint- Exupery." And, finally, in Saint-Exupery's Pilote de Guerre, his memoir of his role in the French Air Force as pilot during the Battle of Paris in 1940, "Pour Madame Stokes, ces souvenirs d'une pilot de ligne change en Pilote de Guerre et en hommage respectueux, Antoine de Saint-Exupery." Each volume is in very good condition. An exceptional collection. Courrier sud, translated as Southern Mail and Southern Carrier, is the first novel by Antoine de Saint-Exupery. Encouraged by the publication of his short story The Aviator, Saint-Exupery followed up with this work based on his pioneering flights for the French airmail service. A structured novel, it has three sections, the shorter outer sections being set in the heat and daylight of the Sahara Desert, the long central section in France at night and in pelting rain. The story thread consists of an investigation into the disappearance of an aviator in the Sahara. The novel was adapted into the 1937 French film Courrier sud directed by Pierre Billon. Night Flight, published as Vol de Nuit in 1931, was the second novel by French writer and aviator Antoine de Saint-Exupery. It went on to become an international bestseller and a film based on it appeared in 1933. Its popularity, which only grew with the ideological conflicts of the 1930s - 1940s, was due to its master theme of sacrificing personal considerations to a cause in which one believes. Terre des hommes is a memoir by the French aristocrat aviator-writer Antoine de Saint-Exupery, and a winner of several literary awards. It deals with themes such as friendship, death, heroism, and solidarity among colleagues, and illustrates the author's opinions of what makes life worth living. It was first published in France in February 1939, and was then translated by Lewis Galantiere and published in English by Reynal and Hitchcock in the United States later the same year. Written in 1942, Pilote de Guerre recounts Saint-Exupery's role in the Armee de l'Air (French Air Force) as pilot of a reconnaissance plane during the Battle of France in 1940. The book condenses months of flights into a single terrifying mission over the town of Arras. Saint-Exupery was assigned to Reconnaissance Group II/33 flying the twin-engine Bloch MB.170. At the start of the war there were only fifty reconnaissance crews, of which twenty-three were in his unit. Within the first few days of the German invasion of France in May 1940, seventeen of the II/33 crews were sacrificed recklessly, he writes "like glasses of water thrown onto a forest fire". Saint-Exupery survived the French defeat but refused to join the Royal Air Force over political differences with de Gaulle and in late 1940 went to New York where he accepted the National Book Award for Wind, Sand and Stars. He remained in North America for two years, and then in the spring of 1943 rejoined his old unit in North Africa. In July 1944, "risking flesh to prove good faith", he failed to return from a reconnaissance mission over France. It was adapted as a radio drama for American audiences by the NBC Red Network and broadcast on 7 October 1942 at the Author's Playhouse. (Inventory #: 90567)
$9,800.00 add to cart or Buy Direct from
Raptis Rare Books
Share this item