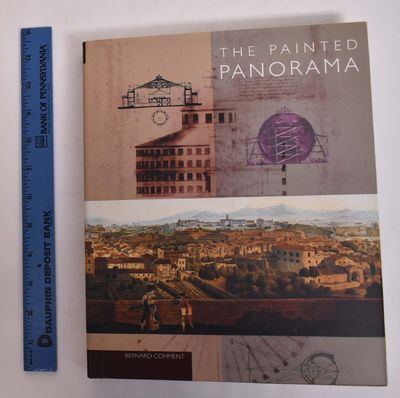 by Comment, Bernard
New York: Harry N. Abrams, 2000. Hardcover. VG/VG. Brown cloth with color pictorial dustjacket. 272 pp., 90 bw and 230 color plates, including 7 folding. Contents as follows: 1. London Panoramas: From Leicester Square to the Colosseum -- 2. Paris Panoramas: From Prevost to Langlois -- 3. Panoramas of Germany, Switzerland and the United States before 1870 -- 4. Variations: From the Diorama to the 'Moving Panorama' -- 5. New Generation, 1870-1900: The Great Exhibitions -- 6. Prefigurations -- 7. Supporters and Detractors: The Ideal Landscape -- 8. Representation/Illusion: A Theory of the Frame -- 9. Limits of Illusion -- 10. From Near/From Far Away -- 11. What Public? -- 12. Memory Created: Experience Replaced -- 13. Individual in the Town: Compensation and Control -- 14. Panoramism and Panopticism -- 15. Views Including Rotundas -- 16. Cross-sections, Elevations, Orientation Plans and Advertisements -- 17. Evolution and Variations -- 18. Panoramic Canvases, Drawings, Studies and Prints -- Genealogy of the Panorama. "This illustrated book surveys the wide variety of panoramas created in both the Old and New Worlds, from the medium's invention to the present day. Included among the views of cities are Robert Barker's panorama of Edinburgh, as well as depictions of Paris, Rome, Damascus, and other urban sites. Vistas of the Mississippi and Congo Rivers are also illustrated. Among other themes, the Crucifixion, the history of the nineteenth century, and crucial moments in military campaigns proved especially popular. Bernard Comment explores these subjects as well as theoretical aspects of the panorama's history, suggesting how their makers expanded upon the earlier history of landscape painting. He shows that the relationship between viewer and "reality" underwent a profound mutation as this new medium developed - a process that opened the way for a novel logic according to which the world would be transformed into a spectacle, and images substituted for direct experience."--BOOK JACKET. (Inventory #: 167055)
$29.99 add to cart or Buy Direct from Mullen Books
Share this item