Zur allgemeinen Relativitatstheorie [On the General Theory of Relativity] 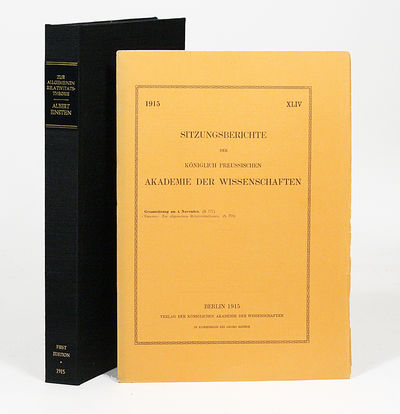 by EINSTEIN, ALBERT
Berlin: Verlag der Königlichen Akademie der Wissenschaften, 1915. First edition. Original wrappers. Fine. FIRST PRINTING IN ORIGINAL WRAPPERS IN FINE CONDITION of Einstein's famous November 4, 1915 paper introducing his new version of general relativity. By autumn 1915, Einstein experienced a "crisis" in his work on his gravitational equations and the general theory of relativity, forcing him to abandon several key elements of his earlier work. In October 1915, "Einstein shifted his focus from the physical strategy, which emphasized his feel for the basic principles of physics, and returned to a greater reliance on a mathematical strategy, which made use of the Riemann and Ricci tensors... 'Einstein's reversal,' writes John Norton, 'parted the waters and led him from bondage into the promised land of general relativity'... "The result was an exhausting, four-week frenzy during which Einstein wrestled with a succession of tensors, equations, corrections, and updates that he rushed to the Prussian Academy in a flurry of four Thursday lectures. It climaxed, with the triumphant revision of Newton's universe, at the end of November 1915" (Isaacson). In this November 4th paper and lecture [On the General Theory of Relativity], Einstein presented "to the plenary session of the Prussian Academy a new version of general relativity," explaining "that he had 'completely lost confidence' in the equations [he] proposed in October 1914... His answers were still not entirely right. There was still one flaw, a much smaller one, which he eliminated three weeks later. But the road lay open. He was lyrical. 'No one who has really grasped it can escape the magic of this [new] theory'" (Pais). Three weeks later - on November 25, 1915 - Einstein did indeed eliminate the flaw and "presented to the physics-mathematics section of the Prussian Academy of Sciences a paper in which 'finally the general theory of relativity is closed as a logical structure'... The work is done" (Pais). See: Isaacson, Einstein, pp. 211-221 and Pais, Subtle is the Lord pp.250-261. Note: Einstein's November 11 paper was titled "Zur allgemeinen Relativitatstheorie II" but, rather than a continuation or advancement of the November 4 paper, it was a step backwards, introducing a serious mistake that he would correct by November 25. IN: Sitzungsberichte der Königlich Preussischen Akademie der Wissenschaften. Berlin: Verlag der Königlichen Akademie der Wissenschaften, 1915. Vol. 44. 778-786. Quarto, original wrappers; custom box. A fine copy. RARE. (Inventory #: 2125)
$4,000.00 add to cart or Buy Direct from
Manhattan Rare Book Company
Share this item

np : np , 1980
(click for more details about Two Standing by Indian Lake [Mixed Media Painting])
View all from this seller>