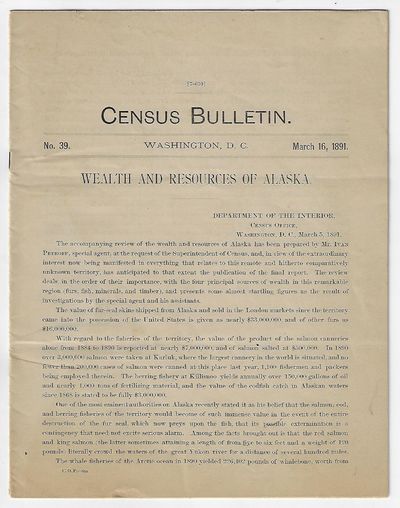 by Petroff, Ivan
Washington, D.C.: Department of the Interior, 1891. First Edition. Softcover. Very good. 15 pp, 7.75 x 10 inches; stapled self-wrappers. Old creases from folding, light handling wear; very good. Issued in advance of the full 1890 census report on the Alaska territory "in view of the extraordinary interest now being manifested in everything that relates to this remote and comparatively unknown country," this bulletin provides details on the "four principal sources of wealth" in Alaska: fur, fish, minerals, and timber. The author, a Russian-born soldier, historian, and newspaper editor, was director of the 1890 Census for Alaska. Here, after discussing the resources prominent in different parts of the territory, he bemoans the fact that the land is being stripped of its bounty by outsiders, with little care or compensation for the native population and other local residents: "The spectacle of so vast a tract of country being thus drained continually for twenty-three years without receiving anything to speak of in return can not probably be equaled in any other part of the United States, and perhaps of the world." The solution, he says, is increased immigration and settlement by those who wish to develop Alaska's industrial potential, but this "would appear to be still in the distant future." Wickersham 8626. (Inventory #: 19970)
$100.00 add to cart or Buy Direct from Walkabout Books
Share this item