The Day of the Triffids. 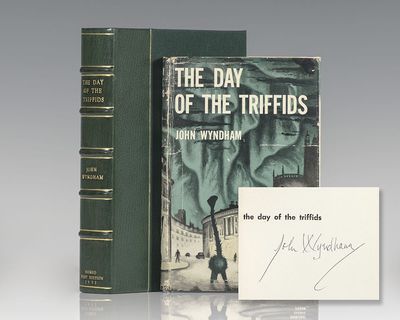 by Wyndham, John
Garden City, NY: Doubleday & Company, Inc, 1951. First American edition, which preceded the British edition of Wyndham's classic work. Octavo, original cloth. Boldly signed by John Wyndham on the half-title page. Fine in a very good dust dust jacket. Jacket design by Whitney Bender. "A thoroughly English apocalypse, it rivals H. G. Wells in conveying how the everyday invaded by the alien would feel. No wonder Stephen King admires Wyndham so much" (Ramsey Campbell). It was the basis for two films, a 1962 feature film produced by George Pitcher and Philip Yordan, directed by Steve Sekely, starring Howard Keel and Nicole Maureyand and a 1981 made for television movie. Anatomy of Wonder (1995) 3-199. Pringle, Science Fiction: The 100 Best Novels 5. (Inventory #: 82090)
$9,500.00 add to cart or Buy Direct from
Raptis Rare Books
Share this item