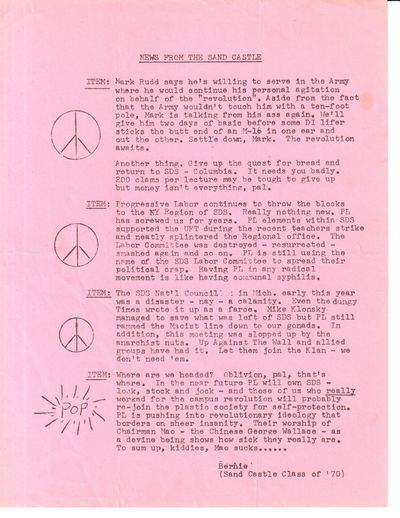 by Bernie
n.p.: [FBI], 1969. 8.5x11 inch leaflet, mimeographed one side, faint fold creases, short closed edge tears, otherwise very good. This leaflet and the circumstances of its mailing, intended to disrupt plans for a major anti-war demonstration planned for April 5, 1969, are discussed in "Assault on the Left: The FBI and the Sixties Antiwar Movement" by James Kirkpatrick Davis and Edwin Hoyt (pages 114-115). It comprises several paragraphs criticizing the competing factions in SDS, especially Progressive Labor ("PL still rammed the Maoist line down to our gonads"). It suggests that those who had worked for campus revolution "will probably re-join the plastic society for self-protection." Our consignor received this leaflet in the mail at the time of its original distribution; he recognized it as a police or FBI provocation and kept it as a souvenir. His impression at the time was that the New York regional SDS mailing list had been pilfered by The Man, and this and similar leaflets signed "Bernie" were mailed anonymously to those on the mailing list. Later researchers, including Davis and Hoyt above, confirmed this hunch. (Inventory #: 227885)
$300.00 add to cart or Buy Direct from Bolerium Books
Share this item