The Gulistan, or flower-garden, of Shaikh Sadi of Shiraz: translated into English ... from the Persian text of Gentius, as used in the East India Company's colleges: together with an essay on Sadi's life and genius 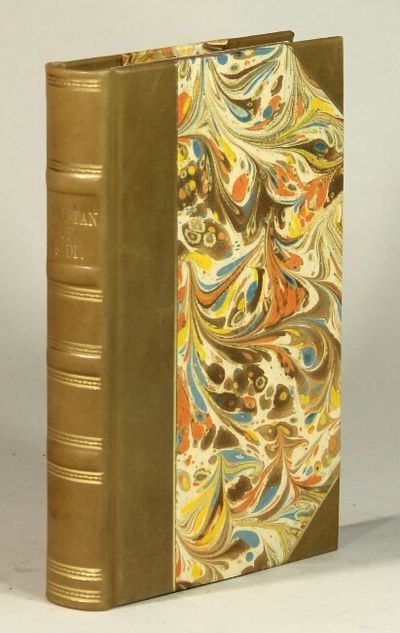 by Saadi of Shiraz, & James Ross, translator
London: J. M. Richardson, 1823. First edition in English, 8vo, pp. [4], 475, [1]; recent half tan calf over marbled boards, gilt-lettered direct on gilt-paneled spine; fore-edge of first two leaves very slightly chipped; all else near fine and sound. This is the first volume in the proposed series of English translations of select Persian classics, "chiefly intended for the use of the students at their colleges." Wikipedia notes that Abū-Muhammad Muslih al-Dīn bin Abdallāh Shīrāzī, better known by his pen-name Saadi, also known as Saadi of Shiraz, was a major Persian poet and literary figure of the medieval period. He is recognized for the quality of his writings and for the depth of his social and moral thoughts. Saadi is widely recognized as one of the greatest poets of the classical literary tradition, earning him the nickname "Master of Speech" or "The Master" among Persian scholars. The Gulistan, containing stories and personal anecdotes, was completed in 1258. It is "interspersed with a variety of short poems which contain aphorisms, advice, and humorous reflections, demonstrating Saadi's profound awareness of the absurdity of human existence." (Inventory #: 52767)
$287.50 add to cart or Buy Direct from
rulon-miller books
Share this item