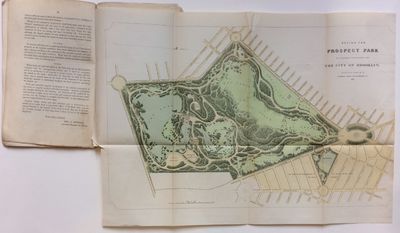 by OLMSTED, Frederick Law and VAUX, Calvert
Brooklyn: I. Van Andens Print, 1867. very good. Maps. Color lithograph. 12" x 19". Set of two maps included in a pamphlet entitled "Seventh Annual Report. Board of Commissioners Prospect Park, Brooklyn," published in January of 1867. Cover stained, corners dinged and toned with two stamps, 'California Academy of Sciences & 'with Compliments of Jno Y. Cuyler Chief Engineer'. He was the assistant engineer to the project. The first map, "Design for Prospect Park as Proposed to be Laid Out for the City of Brooklyn," is a detailed and colored depiction of the plan of Prospect Park designed by Frederick Law Olmsted and Calvert Vaux. Right margin cropped. The second map, "Map Showing the Progress of Work upon the Park up to January 1867," is uncolored and shows an incomplete version of the first map, depicting what had been built of the proposed plan up until that point. The map was created by the renowned Landscape architect Frederick Law Olmsted (1822-1903) who also designed some of the most famous parks in the United States, including Central Park in New York City and Golden Gate Park in San Francisco. A wonderful rarity. (Inventory #: 285044)
$1,100.00 add to cart or Buy Direct from
Argosy Book Store
Share this item

Campaign Maps exhibiting the Line of March of the 20th Corps from Savannah, GA., Goldsborough, N.C., with the Plans of the Battle-Fields of Averyborough and Bentonville, N.C.

New York : Julius Bien & Co.; US War Department , 1895
(click for more details about Campaign Maps exhibiting the Line of March of the 20th Corps from Savannah, GA., Goldsborough, N.C., with the Plans of the Battle-Fields of Averyborough and Bentonville, N.C.)

Map of the Military Department of New Mexico

New York : Julius Bien & Co.; US War Department , 1864
(click for more details about Map of the Military Department of New Mexico)
View all from this seller>