A System of Geography, Popular and scientific, or a Physical and Statistical Account of the World and Its Various Divisions. Illustrated By Maps 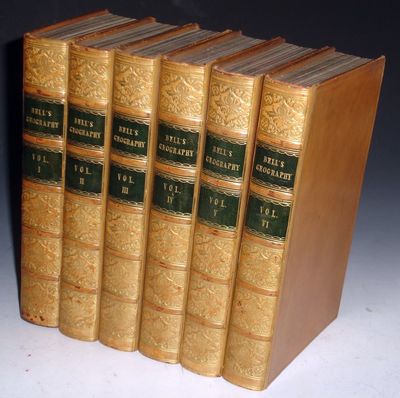 by Bell, James
Glasgow: A. Fullarton, 1832. First Edition. Octavo. In 6 volumes.15 engraved plates, one large folding Political Scale of the Globe, and one folding view of principle mountains in the world, complete with 41folding maps which many reflect the level of how much was yet uncharted. The map of Africa, for instance, shows how little was known in 1832 especially on both sides of the interior north and south of the equator. The map of Central America and Mexico shows much of the Southwest as it was virtually unknown outside of its mission stations and some of the larger Indian tribes. James Bell was a celebrated geographer whose expertise in history led him to produce several works on geography culminating in this his principal work, a project that took over a decade with special attempts to have the latest discoveries of the first quarter of the Nineteenth Century incorporated into his work. A beautiful set, bound in full calf, raised bands with compartments fully gilt decorated, double black spine labels gilt, all edges marbled with marching endpapers, internally fresh with the exception of some off-setting from plates, no foxing, joints appear to have been strengthened, bookplate of the W.D. Mackenzie, son of the Scottish banker and railway entrepreneur, Edward Mackenzie who, in 1853 purchased Fawley Court through auction. After the death of his father, William inherited the house. (Inventory #: 021582)
$1,550.00 add to cart or Buy Direct from
ALCUIN BOOKS, ABAA
Share this item

The Unplesant Profession of Jonathan Hoag

by Heinlein, Robert A.

New York : Brewer and Warren , 1930
(click for more details about N By E.)
View all from this seller>