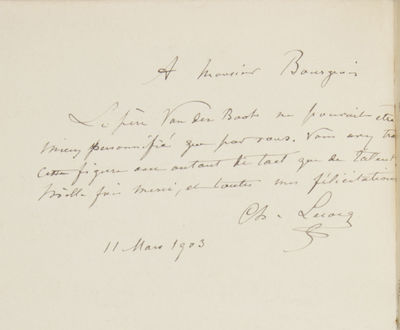 With a 4-line autograph inscription signed by the composer ("Ch. Lecocq") and dated "11 mars 1903" to Bourgeois, who performed the role of Van der Boot in the premiere, praising his performance.

Small tears to edges of upper wrapper; spine worn with some loss. Some signatures split and partially detached; leaf with inscription glued to facing leaf at gutter, slightly obscuring several words of the inscription. First Edition.

"Much of Lecocq's music is characterized by a light touch, but he could also adopt a more lyrical and elevated style than Offenbach and termed several of his operettas opéras comiques. His greatest popular triumph, La fille de Madame Angot, has remained a classic among operettas, and demonstrates Lecocq's abundant flow of pleasing melodies, his deft exploitation of rhythm for a lively theatrical effect, impressive building up of extended numbers, and typically French shaping of phrases." Andrew Lamb in Grove Music Online.