THE QUATERMASS EXPERIMENT: A PLAY FOR TELEVISION IN SIX PARTS 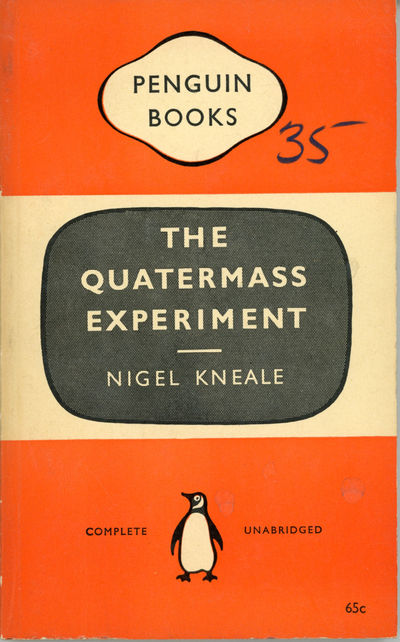 by Kneale, Nigel
[Harmondsworth, Middlesex]: Penguin Books, 1959. Small octavo, pictorial wrappers. First edition. Prints Kneale's revised script for the first of the three BBC Quatermass serials aired in 1953, 1955 and 1958/1959 respectively. Includes film stills. "Effective melodrama and social satire for its time." - Anatomy of Wonder (1987) 3-231. "Excellent scripts." - Pringle, The Ultimate Guide to Science Fiction, second edition (1995), p. 294. "With hindsight, there is a clear pattern in Kneale's work in which ordinary people are seen as stupid and ignorant, and ready prey for the supernatural or science-fictional forces that will almost inevitably attempt to control them. There is a seigneurial, Edwardian element in this, a recoiling from the vulgar. This is a point worth belaboring, because Kneale was certainly a much better than average scriptwriter -- the Quatermass series especially is exemplary -- and his scripts were, paradoxically, very influential on SF, at least at the Gothic and irrational margin of the genre where SF meets fantasy, particularly among film and television producers, who never expect SF to make sense anyway." - SFE (online). This copy is part of the export issue: it has a 65¢ price printed on the front cover. Mild tanning to edges of text block, some rubbing along spine folds, some dust soiling to white background on spine panel, 35 cent price written in black crayon on the front cover, a very good copy. (#160207) (Inventory #: 160207)
$75.00 add to cart or Buy Direct from L.W. Currey
Share this item
L.W. Currey Inc.
Offered by