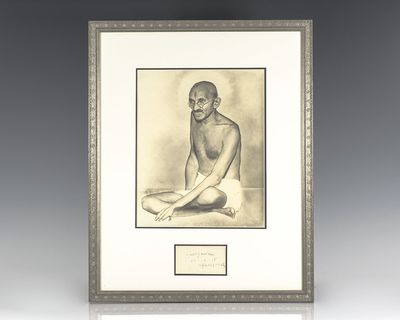 signed first edition
by Gandhi, Mohandas K
Rare Mohandas K. Gandhi autograph, signed at the height of the struggle for Indian Independence. Signed by Gandhi, "M.K. Gandhi 28-12-38 Segaon-Wardha." Eight miles from the city of Wardha, the Indian village of Segoan became the site of Gandhi's Sevagram Ashram, established in 1936 when Gandhi was 67 years old. Gandhi renamed the site Sevagram, meaning "village of service", and resided there until his death by assassination in 1948. In near fine condition. Double matted and framed with a large photograph of Gandhi. The entire piece measures 21 inches by 16.5 inches. Mohandas Karamchand Gandhi led the 32-year struggle for Indian Independence against British rule employing the use nonviolent civil disobedience, inspiring movements of civil rights and freedom throughout the world. Gandhi lived a modest lifestyle and was held as a political prisoner for many years throughout the course of the movement. In 1948, only two years after the British reluctantly granted independence to the people of the Indian subcontinent, Gandhi was assassinated on his way to a prayer meeting in the Birla House garden. His death was mourned nationwide; over two million people joined the five-mile long funeral procession in his honor. (Inventory #: 89151)
$12,500.00 add to cart or Buy Direct from
Raptis Rare Books
Share this item