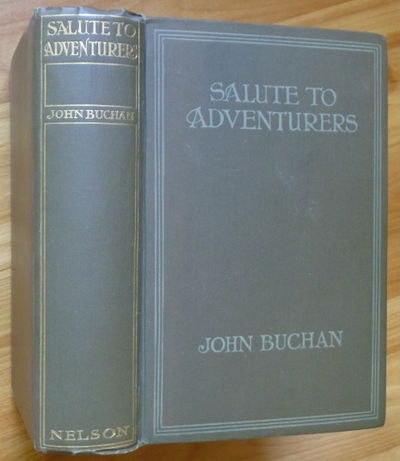 by Buchan, John
1915. London, Edinburgh, Dublin and New York: Thomas Nelson and Sons, n.d. [1915]. Original olive cloth, printed in white on the front cover and in gilt on the spine. First Edition of this tale sited in the 1680s -- with young Andrew Garvald starting out in Scotland, but winding up "in the emerging American colony of Virginia. There he encounters the classic Buchan elements of people who are more than they seem, conspiracies, shadowy figures whose names can only be whispered in certain places, and hanging over all a grave threat to the survival of the colonists from Indian forces massing beyond the mountains and controlled by a mysterious European figure" [A. Hutton]. This is a copy of the true first edition, consisting of 397 pages and with the dedicatory poem preceding the Contents leaf (there was a 1916 second edition, also undated, of 380 pages with those two leaves reversed). This copy is fine except that the volume is slightly askew. This is an uncommon title; later the same year, Buchan hit it big with THE THIRTY-NINE STEPS. Blanchard A30. (Inventory #: 14125)
$225.00 add to cart or Buy Direct from
Sumner & Stillman
Share this item