[SIGNED] Playbill: A Touch of the Poet [Wrapper title] 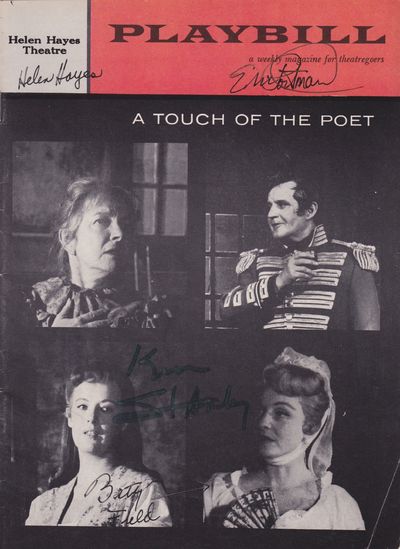 Octavo (8 1/2 x 6 1/2 inches; 228 x 165 mm), 52 pages in stapled pictorial wrappers.
SIGNED on the upper wrapper by four members of the original Broadway cast of Eugene O'Neill's "A Touch of the Poet": Helen Hayes, Betty Field, Kim Stanley, and Eric Portman. "A Touch of the Poet" was the last play that O'Neill wrote and completed. Harold Clurman, the director, says in this Playbill that the play "was to be the first of a series of plays that would trace the history of an American family through the generations from 1828 to the present."

The play opened on October 2, 1958, at the Helen Hayes Theatre and marked the first time that Hayes had played in the theatre named for her. "Given Eugene O'Neill and a cast of superb actors, the effect on the stage is electric," according to New York Times theatre critic Brooks Atkinson. Later in his review, he says: "Mr. Clurman has made a thunderbolt out of O'Neill's writing." (The New York Times, October 3, 1958, page 23).

Signed copies of this Playbill are scarce to the market. SCARCE.