The Plebeians Rehearse the Uprising: A German Tragedy 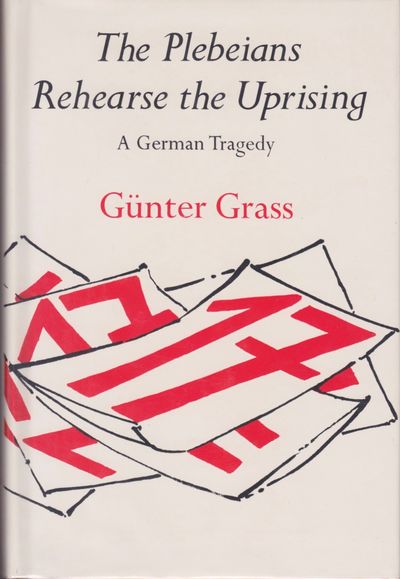 by Grass, Günter
New York: Harcourt, Brace & World, Inc., 1966. Later printing. 8vo (8 1/4 x 5 1/2 inches; 210 x 140 mm), xxxvi, 122 pages in red cloth, black title to spine. Near Fine, with pages very lightly toned, in a Near Fine dust jacket with a small crease in the top left corner of the rear flap.*A play by Günter Grass about the workers' uprising in East Germany on June 17, 1953. The workers beseech "The Boss" (a thinly disguised Bertolt Brecht) to support the uprising. The book includes the text of a speech by Grass as well as a "documentary report" on the uprising. Translated by Ralph Manheim; the book originally was published in Germany under the title, "Die Plebejer proben den Aufstand." The play was controversial; many reviewers thought it was deeply unfair to Brecht because Brecht couldn't defend himself. He was already dead. (Inventory #: 1551)
$26.00 add to cart Available from Le Bookiniste
Share this item