Statement by Rt. Hon. Winston Churchill in the House of Commons on the 27th February, 1940: Navy Estimates 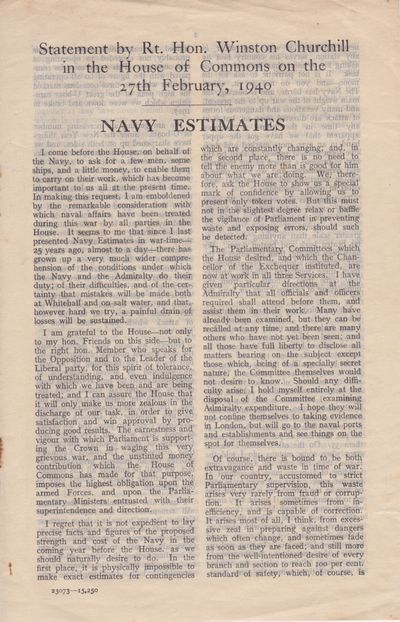 A scarce pamphlet presenting a statement by Winston Churchill as First Lord of the Admiralty, asking Parliament to grant more money to the Navy to meet the threat from Nazi Germany. He says it would not be prudent to give exact numbers in public. But he does expect a significant escalation in hostilities: "We must clearly expect that attacks will be delivered upon the sea-power by which we live, on which all depends, on a far greater scale than anything we have so far beaten back and beaten down."

Churchill also discloses, apparently for the first time, that a battleship torpedoed a few months earlier was the Barham and that the battleship Nelson had been damaged by magnetic mines. He goes on to say that the government has called upon British fishing fleets to assist in minesweeping duties.

Churchill is withering in his criticism of the German military: "Herr Hitler and his Nazis have quite definitely exceeded the worst villainies which Imperial Germany committed in the late war."

Since this is a transcript of his statement to Parliament, the pamphlet also notes some comments from Members of Parliament. Churchill is witty, articulate, and quick on his feet. Altogether, a fascinating look at how the British government was preparing for a long war just a few months before Churchill became Prime Minister. SCARCE.

CONDITION: Staples rusted, some toning and creasing to the fragile wartime paper, a bit of soiling to both the upper and lower wrappers. A Very Good copy. (Inventory #: 1535)
$495.00 add to cart Available from Le Bookiniste
Share this item