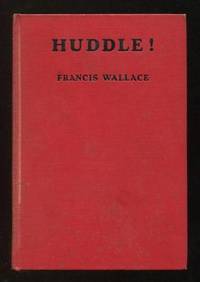 by Wallace, Francis
New York: Farrar & Rinehart. Very Good+. (c.1930). Later Printing. Hardcover. (no dust jacket) [ex-M-G-M Script Dept. copy, so identified by label on ffep, library stamp on ffep and several pages; light external soiling, slight darkening to spine cloth, small tears in the fore-edges of a couple of pages near the end of the book, due to careless opening; vintage bookseller's label on rear pastedown (Satyr Book Shop, Hollywood/Los Angeles)]. The first novel by this sportswriter-turned-fictioneer, who (not surprisingly) often wrote sports-backgrounded stories, a number of which (including this college-football yarn) were made into movies, the most notable of which was probably KID GALAHAD (actually filmed twice, in 1937 and 1962, the latter starring Elvis Presley). This very copy of the book, in fact, was once the property of the Script Department at M-G-M, the studio that released the film version (which starred Ramon Novarro and Madge Evans) in 1932. That doesn't quite make it an "association copy," as there's no evidence that this particular book was ever consulted by the handful of screenwriters -- but I'd say it can at least be considered a "proximate copy." (It was also once owned by longtime M-G-M writer-producer Carey Wilson, albeit not marked in any way to indicate that fact.) Gotta love the dedication, too: "To Rock and His Boys." (Wallace was a Notre Dame graduate and loyalist, and wrote the first newspaper story reporting Knute Rockne's famous "win one for the Gipper" speech.) . (Inventory #: 24120)
$50.00 add to cart Available from ReadInk
Share this item
ReadInk
Offered by

by Gish, Lillian; edited by James A. Frasher