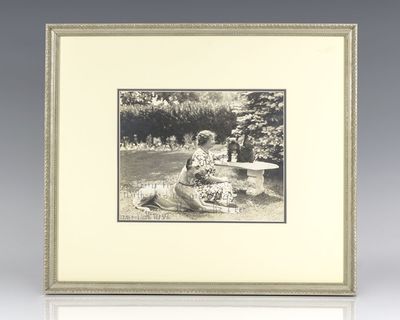 signed first edition
by Keller, Helen
Original photograph of Helen Keller with her Great Dane, Sieglinde, and beloved teacher Anne Sullivan's Scottish Terrier. Inscribed by Helen Keller, "To Perry Finkelstein, with cordial greetings, Helen Keller, June 14th, 1938, Helen Keller." Helen Keller had at least one pet from childhood until the end of her life. Dogs served as a special source of companionship to Keller and accompanied wherever she went, from college classrooms to a visit to Japan. Keller is even credited with helping to introduce Japanese Akita breed to the United States with her beloved Kamikaze-Go and Kenzan-Go which were imported directly from Japan. The photograph measures 9.25 inches by 7.25 inches. In near fine condition. Doubled matted and framed; the entire piece measures 16.5 inches by 14.5 inches. Rare and desirable offering a unique glimpse into the daily life of the extraordinary figure. Helen Keller became a well-traveled lecturer, activist, and prolific writer despite the rare illness she contracted at 19 months of age which left her both blind and deaf. Much of Keller's success was attributed to the 49-year relationship she had with governess and companion Anne Sullivan who initially taught Keller to communicate by spelling words into her hand. In 1904, at the age of 24, Keller graduated from Radcliffe College of Harvard University, becoming the first deaf-blind person to earn a bachelor of arts degree. She went on to become a world-famous speaker and author, best remembered for her work as an advocate for persons with disabilities, the deaf community, and women's suffrage. (Inventory #: 89153)
$2000.00 add to cart or Buy Direct from
Raptis Rare Books
Share this item