The Wings of the Dove. 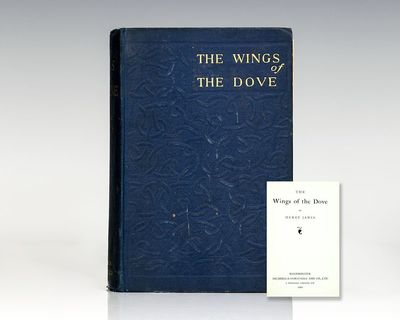 by James, Henry
London: Westminster and Archibald Constable & Co, 1902. First edition of Henry James' landmark novel. Octavo, original cloth. In very good condition with some light rubbing to the spine. Considered one of James' greatest novels of subtle character portrayal, detailing the days of "the vivid and magnificent yet corrupt Kate Croy... trapped, forced, held down by her social circumstances" (Barbara Everett, Times Literary Supplement, 2005). "In his last three novels, The Wings of the Dove, The Ambassadors, and The Golden Bowl, he returned to the 'international' theme of the contrast of American and European character" (Drabble, 503). The Wings of the Dove later became the inspiration for the opera of the same title by Douglas Moore in 1961. Actress Helena Bonham Carter garnered an Academy Award nomination for Best Actress as Kate Croy in the 1997 film adaptation of the novel. The Modern Library ranked it 26th on its list of the 100 best English-language novels of the 20th century. (Inventory #: 70032)
$650.00 add to cart or Buy Direct from
Raptis Rare Books
Share this item