Fans: From the 18th to the Beginning of the 20th Century 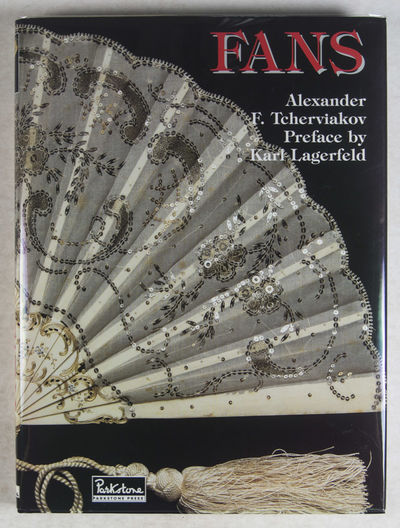 by Tcherviakov, Alexander F.
Bournemouth: Parkstone Press, 1998. First edition. Hardcover. Fine condition. Folio. 216pp. Original illustrated dustjacket, red lettering on spine, over illustrated paper-covered boards with red and white lettering on cover, red and black on spine. Illustrated endpapers. Collection of the Palace of Ostankino in Moscow. "Fans brought from other countries mainly of French, English, German or Italian make, are represented, as well as some which are Russian made. Manufacture flourished particularly during the reign of Catherine the Great when the fan became an indispensable part of ladies' ceremonial and evening dress... reflecting the changes in dress and fashion through the 19th and into the early 20th century. Featuring aphorisms, music, and love poems, some fans mirrored contemporary culture." (Publisher). The Ostankino collection of fans deserves particular attention. It consists of more than two hundred Russian and European masterpieces. Beautifully illustrated with striking color photographs throughout. Contains Press Chronicles of 1769-1790, glossary, a list of exhibition catalogues, a descriptive catalogue of the fans included here, notes and a bibliography at rear. DJ with minor wear. (Inventory #: 44312)
$150.00 add to cart or Buy Direct from
Eric Chaim Kline Bookseller
Share this item