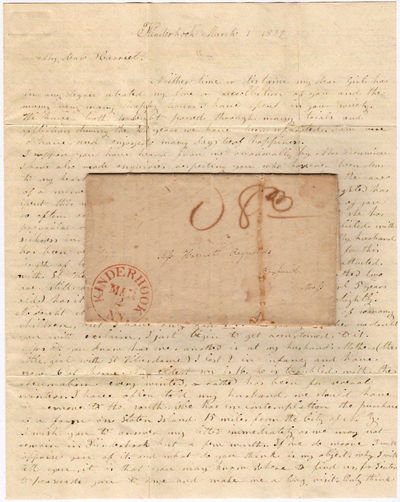 by From Sarah M. Menton to Harriet Reynolds
Kinderhook, New York to Boxford, Massachusetts, 1839. Unbound. Very good. The cover bears a scarce 31mm red circular Kinderhook post mark dated March 2 and a manuscript "18¾" postage rate showing the cost to send a letter between 150 and 400 miles. In nice shape with a 4" split to one mailing fold. A transcript is included.

In this letter Menton reconnects with a childhood friend. There is considerable detail about old times and their close childhood relationship ("I have often in my sleeping hours visited . . . to spend the night with you which you recollect was often the case.")

More interestingly, she describes the medical misfortunes that have struck her family of twelve. "My husband has been very much troubled with the rheumatism. . . My children were attacted with St. Vitus dance [and] two are still afflicted. One of them (a little girl 5 years old) has it very bad. The other (a boy of 14) has it slightly. No doubt it appears strange & you to hear me speak of so many children, but I have had 10!! . . . I lost two in infancy. . . . The eldest son is 16. He is troubled with the rheumatism [too]."Rheumatism was a generic term used to describe a wide variety of joint issues to include those stemming from infections, arthritis, gout, etc.

St. Vitus Dance, now known as Sydenham's chorea, was a disorder characterized by rapid, uncoordinated jerking movements primarily affecting the face, hands, and feet. It is now associated with Streptococcus infections and rheumatic fever, so perhaps the ailments of her children and husband were all related.

An interesting letter that is at once both hopeful and melancholy. (Inventory #: 009135)
$125.00 add to cart or Buy Direct from
Read'Em Again Books and Paper
Share this item