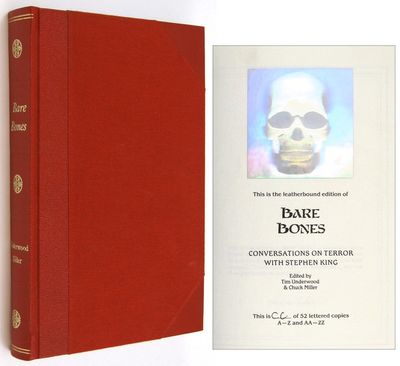 by (KING, Stephen)
Los Angeles/Columbia: Underwood-Miller. 1988. The deluxe edition of this compendium of interviews with Stephen King, 1979-1987. Edited by Tim Underwood and Chuck Miller. One of 52 copies of the deluxe edition (of 1152 copies total); this is copy "CC." Half-bound in leather. With the bookplate of contributor Stanley Wiater on the front flyleaf. Wiater has two contributions -- an interview with King on the set of Maximun Overdrive, the first and only film King directed, and a joint interview with King and Peter Straub at the 1979 World Fantasy Convention, in Providence, Rhode Island. Fine. Unless otherwise noted, our first editions are first printings. First Edition. Hardcover. Fine. (Inventory #: 033205)
$300.00 add to cart Available from
Ken Lopez - Bookseller
Share this item