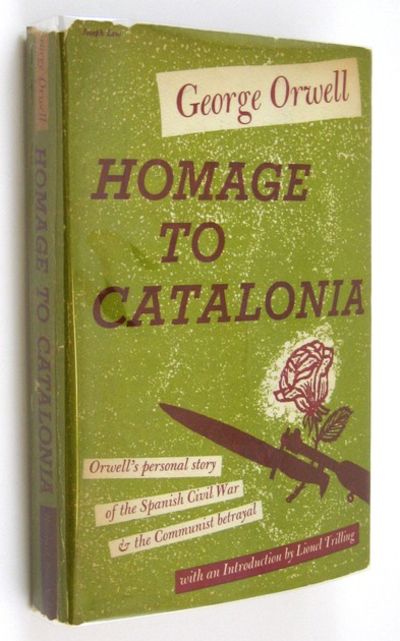 by ORWELL, George
NY: Harcourt Brace. (1952). An advance reading copy of the first American edition of Orwell's personal account of the Spanish Civil War, in which he was wounded. When the book was first published, in England in 1938, Orwell's careful account of the manner in which the Spanish Communists betrayed the Republic, with whom they were nominally allied, contradicted the leftist orthodoxy of the day and the book was largely ignored. This edition, published posthumously in 1952, includes an introduction by Lionel Trilling that didn't appear in the British edition and which puts Orwell's sympathies, and his political transformation, in context. Unbound signatures, with the publisher's label on the front flyleaf, stating "Advance Copy," and noting, by hand, the release date (May 22) and the price of $3.50. The front and rear panels of the original jacket are present, and we have supplied a second jacket, but it too is losing its spine. Near fine in a fair dust jacket. Very scarce. Unless otherwise noted, our first editions are first printings. First Edition. Softcover. Near Fine. (Inventory #: 033484)
$500.00 add to cart Available from
Ken Lopez - Bookseller
Share this item