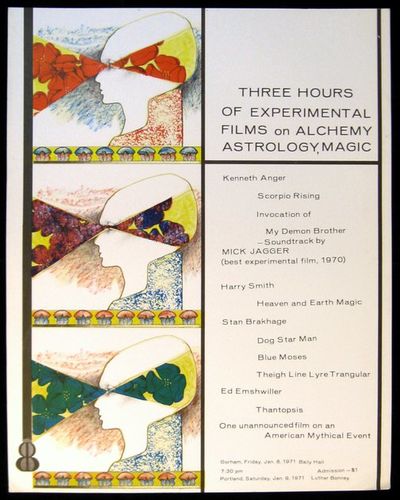 Gorham/Portland: [University of Southern Maine]. 1971. Poster advertising two showings of films by Kenneth Anger, Harry Smith, Stan Brakhage, Ed Emshwiller, and "one unannounced film on an American Mythical Event," to be held on two campuses of the University of Southern Maine. Anger's films were his landmark Scorpio Rising and his 1969 Invocation of My Demon Brother, which had a soundtrack by Mick Jagger and won a Film Culture award in 1970 for best experimental film. Brakhage's films included the Dog Star Man sequence and two others from the early 1960s, one of which includes a typo in its title ("Theigh" instead of "Thigh"). 19" x 24". An attractive and compelling design, four color on what we believe to be the more common white background; near fine. No Binding. Near Fine. (Inventory #: 033336)
$125.00 add to cart Available from
Ken Lopez - Bookseller
Share this item