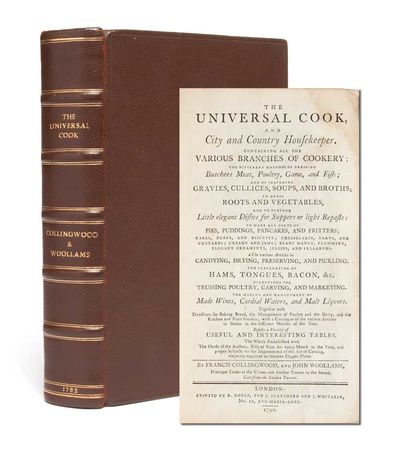 by Collingwood, Francis and John Woollams
London: printed by R. Noble for J. Scatcherd & J. Whitaker, 1792. First Edition. Near Fine. Bound in later full morocco with gilt to spine; small cracks to front hinge but holding well. Marbled endpapers, and ownership signatures of Kate Neskey and Mrs. E. Bolt to later and original front endpapers, respectively. Internally Near Fine, with minor dampstain to top corner of original front endpaper and small paper loss to bottom corner of pages 353-354 affecting the catch word on 353; several plates trimmed close. Overall an exceptionally clean and neat copy of this rare cookery text, which shows none of the signs of kitchen use usually borne by books of this ilk. Collates [28], [12 Bills of Fare plates], 451 pages: Complete. Including the frontis and an additional plate on page 320, there are 14 plates in total. No copies have appeared at auction in over 6 years, and ESTC reports only 8 copies held at institutions in the US. Drawing on their experiences as the "Principal Cooks at the Crown and Anchor Tavern at the Strand," Francis Collingswood and John Woollams created a rich and comprehensive manual that touches on multiple branches of cookery. In addition to instructions on "dressing butchers meat, poultry, game, and fish" it includes fancy dishes and broths, information on wines and spirits, and illustrations to aid in the table-setting of multiple courses. With some good humor, the authors inform their readers that they do not intend to explore the history of cookery or "to discover what was the Food of our parents in the Garden of Eden." Rather, they participate in a shift that was happening in English kitchens during the Enlightenment: they take a logical, scientific approach to domestic work. "At present, Cookery is become a Science, that every Age has contributed its Mite to the Improvement of this Art, which seems now to have reached a very high Degree of Perfection." Acknowledging that the recipes contained in their tome reflect changes and tweaks they have developed to fit their own audiences, Collingwood and Woollams admit that they have drawn on the work of predecessors, including "[Hannah] Glasse, [Charlotte] Mason, [and Elizabeth] Raffald." These 18th century culinary writers enjoyed popularity and success in their own time; and as the men use science to justify their entry into what had been a traditionally female field, they drop the women's names in the hope that their authority "will in some Degree entitle us to the Patronage of the Public." A fascinating and comprehensive culinary text, which in its structure and style was clearly influenced by Elizabeth Raffald's The Experienced English Housekeeper. ESTC T50471. Near Fine. (Inventory #: 2381)
$1550.00 add to cart or Buy Direct from
Whitmore Rare Books
Share this item