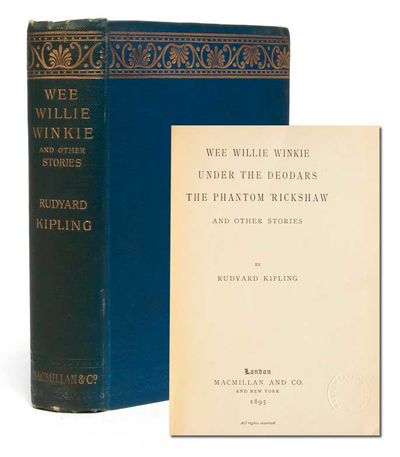 by Kipling, Rudyard
London: Macmillan and Co, 1895. First Edition. Fine. Blindstamped "Presentation Copy" on the title page, otherwise unmarked. A Fine copy with very few faults to nitpick, first leaf of chapter one opened a bit roughly. Telling the tale of Willie Winkie, the young son of a military Colonel, Kipling's children's book depicts the dangers to be found in the British colonies as well as the opportunities those spaces pose for bravery and growth. Though the narrative begins with Willie's youthful rebellion against the rigid rules of the military camp in which he lives, it traces his successful attempt to right his wrongs and rescue those put at risk. In the end, Willie claims his adult name -- notably Percival, the same name as a knight of the Round Table -- and Kipling declares "And in this manner did Wee Willie Winkie enter into his manhood." A charming coming-of-age. Fine. (Inventory #: 2356)
$295.00 add to cart or Buy Direct from
Whitmore Rare Books
Share this item