Voyage to the Pacific Ocean. Undertaken, by the command of His Majesty, for making discoveries in the Northern Hemisphere. To Determine The Position and Extent of the West Side of North America; its Distance from Asia; and the Practicability of a Northern Passage to Europe. Performed under the direction of Captains Cook, Clerke, and Gore, in His Majesty's ships the Resolution and Discovery; in the years 1776, 1777, 1778, 1779, and 1780. In three volumes. Vol. I. and II. written by Captain James Cook, F.R.S. Vol. III. by Captain James King, LL.D. and F.R.S. Published by order of the Lords Commissioners of the Admiralty 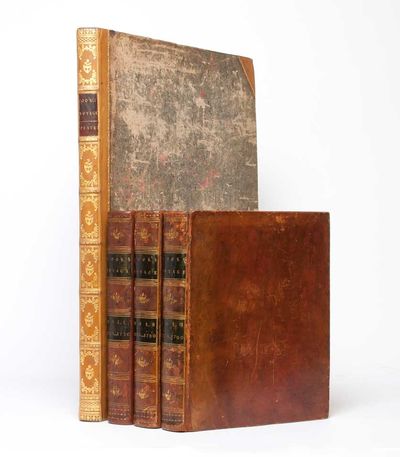 by Cook, Captain James
London: printed for G. Nicol, bookseller to His Majesty, in the Strand; and T. Cadell, 1784. First edition. Three quarto volumes (11 7/16 x 9 inches; 290 x 230 mm.), plus large folio atlas volume (21 3/4 x 15 15/16 inches; 552 x 405 mm.). [8], xcvi, 421, [1, blank]; [12], 549, [1, blank]; [12], 558, [1, advertisement], [1, blank] pp. Volume III bound with the final leaf of advertisements for Cook's First and Second Voyages. Three text volumes with twenty-four engraved plates and charts (thirteen of which are folding) and appendix with 1 folding letterpress table facing p. 528 in Volume III. Sixty-three large plates and charts (one folding, one double-page) in the folio atlas volume (eighty-seven total). With tissue guards. The text volumes bound in contemporary tree calf. Spines each with two black leather spines labels, lettered in gilt. Spines stamped and ruled in gilt. A bit of rubbing and flaking to leather. Volume one rebacked with the original spine laid down. Each volume with some minor offsetting. Trivial foxing, generally to preliminary leaves. Charts occasionally causing some offsetting. Publisher's advertisement in volume three with lower corner torn but not affecting text. Overall text is extremely clean. Altas in contemporary marbled paper boards. Rebacked and recornered with half polished calf. Spine tooled in gilt. Generally the plates are exceptionally clean. Overall a very good set with beautifully clean text and plates. "Cook's third voyage was organized to seek the Northwest Passage and to return [the islander] Omai to Tahiti. Officers of the crew included William Bligh, James Burney, James Colnett, and George Vancouver. John Webber who was appointed artist to the expedition. After calling at Kerguelen Island, Tasmania, New Zealand, and the Cook, Tonga, and Society Islands, the expedition sailed north and discovered Christmas Island and the Hawaiian Islands, which Cook named the Sandwich Islands. Cook charted the American west coast from Northern California through the Bering Strait as far north as latitude 70 degrees 44 minutes before he was stopped by pack ice. He returned to Hawaii for the winter and was killed in an unhappy skirmish with the natives over a boat. Despite hostilities with the United States and France, the scientific nature of this expedition caused the various governments to exempt these vessels from capture. The voyage resulted in what Cook judged his most valuable discovery - the Hawaiian Islands" (Hill). (Inventory #: 2022)
$23500.00 add to cart or Buy Direct from
Whitmore Rare Books
Share this item