Discourses on the Jewish Religion. 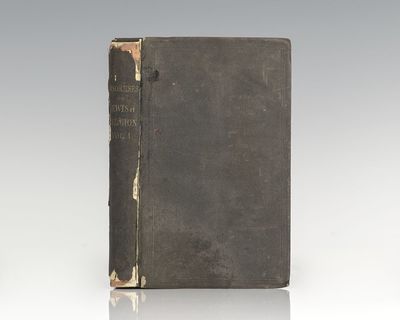 by Leeser, Isaac
Philadelphia: Sherman & Co, 1867. First edition of one of the 'major builders of American Judaism', Isaac Leeser's Discourses on the Jewish Religion. Volume I only of the original ten volumes. Octavo, original cloth, gilt titles to the spine, rubbing and wear to the extremities, early ownership inscription on the front free endpaper. In good condition. A rare and unrestored example of early American Judaica. American Jewish lay minister, author, translator, and publisher Issac Leeser's "contributions to every area of Jewish culture and religion made him a major builder of American Judaism." In addition to his influence on the Jewish pulpit in the United States, Leeser became the first American Jewish publisher and produced the first Jewish translation of the bible into English. "The translation of the Bible was Leeser's great literary achievement and represented many years of patient labor and devotion to a task which he considered sacred...until the new Jewish Publication Society version was issued in 1917, it was the only source from which many Jews not conversant with Hebrew derived their knowledge of the Bible in accordance with Jewish tradition" (Waxman, 1090). (Inventory #: 82502)
$1800.00 add to cart or Buy Direct from
Raptis Rare Books
Share this item