1867-1917, The Book of the Pageant Peru [cover text]. The Historical Pageant of Peru; presented as a feature of the semi-centennial celebration of the founding of the Peru, Nebraska, state normal school. Normal woods, June 5th, 1917, 8:15 P.M. The price of this book is twenty-five cents 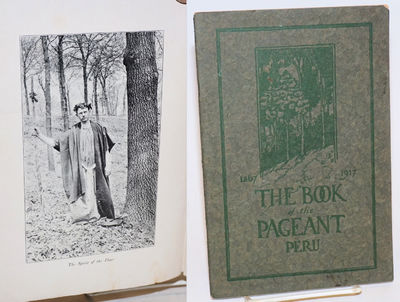 by members, Executive Committee
Peru NE: the school, 1917. 33p., printed texts with a single photograph on reasonably alkaline glazed paperstock; staplebound pamphlet paste-fastened into 8.5x5.5 inch textured gray wraps decorated and titled in dark green. Mild handling-soil to first several leaves, staples slightly rusted, the cover titling (dark green on dark gray) is nearly illegible, an okay copy. FYI, the sole photo is agreeably silly, a male student garbed as "The Spirit of the Place" faces camera deep in "Normal woods" and obviously wishes he were elsewhere; but he's preparing to be a teacher and must endure. Further FYI: the story of this teachers' school is "portrayed" from "a remote geological period," seguing into "Indian Life" and "Pioneer Settlement" and the dialogue was prepared by a committee. (Inventory #: 228621)
$20.00 add to cart or Buy Direct from Bolerium Books
Share this item