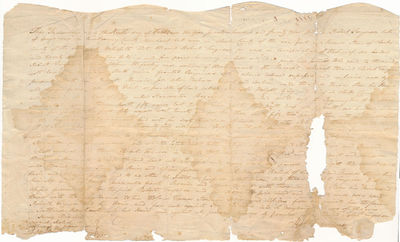 signed
by STONE, Thomas (1743-87)
This Declaration of Independence signer was a Maryland attorney and plantation owner; as delegate to the Continental Congress, he was a pacifist but nevertheless favored drafting the Declaration of Independence, and he also helped draft the Articles of Confederation; he died at age 44 apparently of a broken heart just months after the premature death of his 36-year-old wife. ADS (within text), 1p, 15" X 9", Charles County, Maryland, 9 October 1779. Fair only. Bottom edge in particular quite edgeworn and delicate, with lightly age toned stock bearing large dampstains, a bit of paper loss along one delicate fold line at right and small edge chips mainly along lower edge, partly obscuring Ferguson signature and a few other words; numerous small but expert and discreet archival mends on verso; top scalloped edge as well as left and right edges nice. Lengthy and detailed boilerplate text entirely in Stone's hand, neatly and fairly legibly penned in brown ink and signed by him several times within the text. In this land deed, Stone purchases from Robert Ferguson for 124 pounds 14 shillings 4 pence "that Tract or parcell of Land called a Bridgets Delight lying and being in Charles County " followed by a detailed location description. Docket statement on verso likewise in Stone's hand and also with his signature within the text, signed at the close by two unknown officials; second docket on another verso panel in another hand. Despite rough condition as described above, a decent and interesting example of this quite scarce Signer's autograph. Having died at a rather early age, his autograph material is rarely encountered. (Inventory #: 44078)
$1,750.00 add to cart or Buy Direct from
Main Street Fine Books & Mss.
Share this item

London : The Limited Editions Club , 1934
(click for more details about The Canterbury Tales)
View all from this seller>