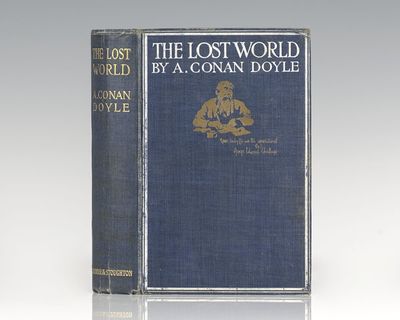 by Doyle, Sir Arthur Conan
London: Hodder & Stoughton, 1912. First edition of Sir Arthur Conan Doyle's "robust adventure story," illustrated with eight tipped-in plates, including frontispiece photographic portrait of "the members of the exploring party." Octavo, original blue cloth, gilt titles to the spine, gilt vignette of Professor Challenger to the front panel, photographic frontispiece and seven additional plates; two full-page maps. Bookplate, in very good condition with moderate shelfwear. A nice example. As early as 1889, Conan Doyle mused about writing "a Rider Haggardy kind of book... dedicated to all the naughty boys of the Empire." By 1911 "he was writing it at last... inspired in part by local fossil evidences of prehistoric life"--including two fossilized iguanadon feet, a Stone Age flint arrowhead--and "by sentiments expressed at a May 1910 luncheon in honor of the Arctic explorer Robert Peary... [For] The Lost World, he turned to a barely explored region of the Amazon in South America; for as he said at Peary's luncheon, 'romance writers are a class of people who very much dislike being hampered by facts'" (Arthur Conan Doyle: A Life in Letters, 577-8). The restless, questing intellect of Sir Arthur Conan Doyle spurred him far beyond the ingenious puzzles he constructed for Sherlock Holmes. In The Lost World, Doyle, a devotee of fantastic tales of adventure and discovery, introduces his readers to Professor Challenger, an eccentric paleontologist, on his suspense-filled search for prehistoric creatures in the wilds of the Amazon. Professor Challenger's doughty troupe includes a skeptical colleague, Professor Summerlee; the cool-headed, plucky sportsman Lord John Roxton; and the narrator, the intrepid reporter Edward Malone. When their bridge to civilization collapses, the explorers find themselves marooned among dinosaurs and savage ape-people. "Despite such anachronisms as cavemen living with dinosaurs, both Challenger and the credibility of the detail strengthen the narrative, making it the classic of its type" Anatomy of Wonder. Barron, Anatomy of Wonder, 1-31; Goldscheider, Conan Doyle Bibliography, 477. (Inventory #: 89247)
$1500.00 add to cart or Buy Direct from
Raptis Rare Books
Share this item