The Dunciad, Variorum. With the Prolegomena of Scriblerus. 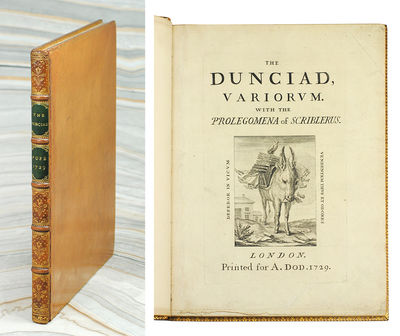 by [Pope, Alexander].
4to. London: A Dod, 1729. 4to, engraved title page with vignette of book-laden ass, 16, (2), 6, 9-29, (3), 118, cxix-cxxiv pp. Engraved head-pieces, woodcut tail-pieces. Full polished calf by Bedford, triple gilt fillet borders, backstrip gilt with floral designs and green labels, inner dentelles gilt, top edge gilt, bottom edge untrimmed. Front joint skillfully repaired, a clean and attractive copy with the signature and bookplate of Maurice Baring, and the monogram bookplate of Charles C. Kalbfleisch. § First variorum edition, first complete edition of the first three books of The Dunciad. Pope didn’t openly avow his authorship until 1735 but this is the first edition to include several unambiguous hints. According to Griffith, the real publisher was Lawton Gilliver who used the fictitious imprint to suggest the publisher was A. Dodd who had published all the London editions of 1728. This edition of the Dunciad, newly expanded with pseudo-scholarly paraphernalia and extensive ironic footnotes, was a counter-counter-attack in the ongoing war between Pope and his outraged satiric targets. This copy once belonged to Maurice Baring OBE (1874-1945), the English writer, Catholic convert, and regular member of the upper class literary circles including Virgina Woolf, Hilaire Belloc, and G.K. Chesterton. From him it passed to the American collector Charles C. Kalbfleisch (d.1943), a member of the Grolier Club for 50 years; his books, including this one, were auctioned by Parke-Bernet in January 1944 in the sale "The Arts of the Book . . . The Splendid Library Formed by the Late Charles C. Kalbfleisch, New York." ESTC T5544. Griffith 211. Rothschild 1597 (Griffith variant b). (Inventory #: 110457)
$1750.00 add to cart or Buy Direct from
John Windle, Bookseller
Share this item

San Francisco : The Book Club of California , 2019
(click for more details)
View all >