The Merry Wives of Windsor. 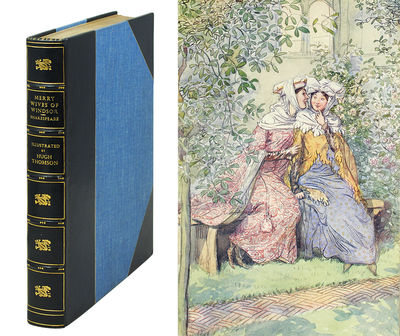 by Shakespeare, William. Thomson, Hugh (illustrator).
4to. London: William Heinemann, 1910. 4to, viii, 170, (2) pp. With a frontispiece and 40 color-plates tipped in, captioned tissue guards. Bound by Frost and Co. of Bath in three quarters blue morocco with cloth boards, ruled in gilt, backstrip ruled and lettered in gilt and with lyre and trumpet gilt stamp, top edge gilt. Touch of toning to the deckle edge. A fine copy. § First edition, one of 350 deluxe numbered copies signed by the illustrator. Printed at the Ballantyne Press. A lovely example of Thomson’s mature work, perfectly suited to Shakespeare’s comedy of marital errors starring the bumbling Sir John Falstaff and the quick-witted Mistress Ford and Mistress Page. Born in Derry, Ireland in 1860, Thomson received no formal training yet won lasting admiration for his illustrations of gift books, particularly for the works of Austen, Dickens, Barrie and Shakespeare. (Inventory #: 110823)
$750.00 add to cart or Buy Direct from
John Windle, Bookseller
Share this item

San Francisco : The Book Club of California , 2019
(click for more details)
View all >