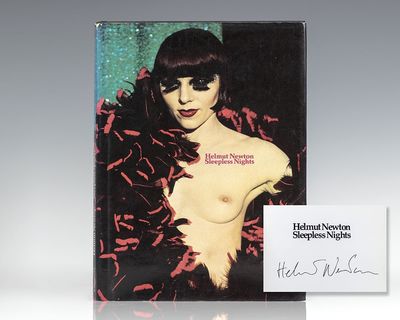 by Newton, Helmut
New York: Congreve Publishing Company, 1978. First edition of Newton's second photobook. Small quarto, original cloth, illustrated throughout. Boldly signed by Helmut Newton on the title page. Near fine in a near fine dust jacket. Introduction by Edward Behr. Helmut Newton was one of the most influential fashion photographers of all time. Born in Berlin, he arrived in Australia in 1940 and married June Brunell (a.k.a. Alice Springs) eight years later. He first achieved international fame in the 1970's while working principally for French Vogue, and his celebrity and influence grew over the decades. Newton preferred to shoot in streets or interiors, rather than studios. Controversial scenarios, bold lighting, and striking compositions came to form his signature look. In 1990 he was awarded the Grand Prix National for photography; in 1992 the German government awarded him Das Grosse Verdienstkreuz for services to German culture, and he was appointed Officer des Arts, Lettres et Sciences by S.A.S. Princess Caroline of Monaco. In 1996, he was appointed Commandeur de l'Ordre des Arts et des Lettres by Philippe Douste-Blazy, the French Minister of Culture. (Inventory #: 78426)
$450.00 add to cart or Buy Direct from
Raptis Rare Books
Share this item