Laws of the Sea, With Reference to Maritime Commerce During Peace.. 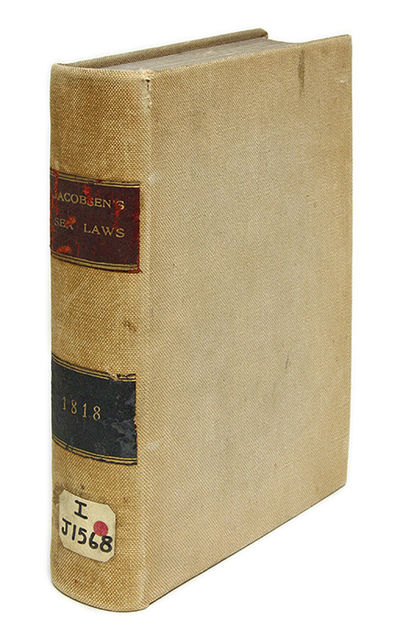 by Jacobsen, Frederick J; Frick, William, Translato
1818. "One of the Great Pleasures of the Legal Bibliophile" Jacobsen, Frederick J. [1774-1822]. Frick, William [1790-1855], Translator. Laws of the Sea, With Reference to Maritime Commerce, During Peace and War. From the German by William Frick. Baltimore: Published by Edward J. Coale, 1818. xxxv, 636 pp. Octavo (8-1/4" x 5-1/4"). Later library cloth, red and black calf lettering pieces and paper shelf label to spine. Some shelfwear and soiling, light chipping to lettering pieces, front joint just starting at head, corners bumped, newspaper clipping concerning an 1845 maritime case pasted to rear endleaf. Moderate toning to text, faint library stamps, one embossed, to title page, library marks to verso, other small library marks to rear pastedown. $500. * First English-language edition and the only American edition. Originally published in 1815, Marvin spoke highly of this work in his Legal Bibliography, noting that few have equaled his wide range of research and depth of learning. As late as 1921, G.L. Canfield, writing in the Michigan Law Review, called this work "one of the pleasures of the legal bibliophile" that "remain[s] essential today to a practitioner's library (19:580-582). Jacobsen, a German jurist, was an internationally recognized authority on maritime law. Laws of the Sea is based on a sixteen-year study of the laws of Italy, France, Great Britain, Holland, Denmark and Germany. It remains the most thorough single-volume study of English and continental maritime law in the early nineteenth century, a turbulent era shaped by the French Revolution and Napoleon. Marvin, Legal Bibliography 418-419. Cohen, Bibliography of Early American Law 1593. (Inventory #: 68851)
$500.00 add to cart or Buy Direct from
Lawbook Exchange
Share this item

by Justinian I, Emperor of the East; Holoander, Greg