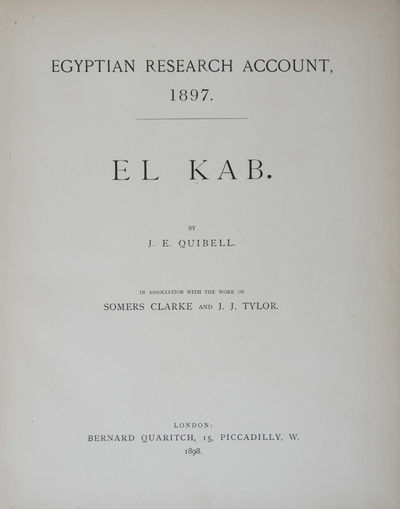 by Quibell, J. E.; in association with the work of Somers Clarke and J. J. Taylor
London: Bernard Quaritch, 1898. Ex-Library First edition. Hardcover. g- to g+. Folio. iv, 23pp., xxvii plates. Original burgundy half-cloth over gray boards with black lettering on cover and spine. Egyptian Research Account, 1897. El Kab (Nekheb) is located on the east bank of the Nile near the Wadi Hellal, app. 90 kilometers to the south of Thebes. Shaped like a massive square with a large surrounding wall of mud bricks, the city consists of prehistoric and ancient Egyptian settlements, rock-cut tombs of the early Eighteenth Dynasty, and remains of temples from the Early Dynastic period to the Ptolemaic Kingdom. Quibell's expedition is the first scientific excavation of the site at the end of the nineteenth century.The report is structured in five chapters describing the earliest tombs, the "New Race" remains, the Middle Kingdom cemetery, the New Empire monuments, and a descriptive list of all 27 plates, followed by the plates itself. These are illustrated with sepia-toned photographs, plans and measured drawings of various parts of the site, and numerous line drawings of artifacts documenting results of the excavation. Library barcode and sticker on cover and spine with spine faded and boards rubbed. Library pocket and numeric stamp on inside back cover. Library stamp on top and bottom edge. Binding in overall good-, interior in good+ condition. (Inventory #: 44433)
$450.00 add to cart or Buy Direct from
Eric Chaim Kline Bookseller
Share this item