The Partisan Rangers of the Confederate Army 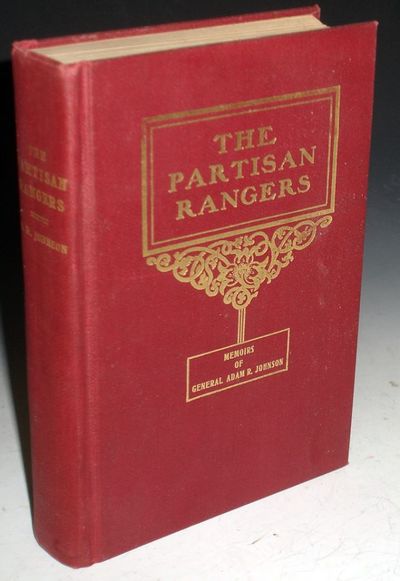 by Johnson, Adam Rankin; William J. Davis
Louisville, KY: G.G. Fetter Co, 1904. First Edition. Octavo. xii, 476 pages, [64] leaves of plates, illustrations, portraits. The memoirs of Brigadier-General Adam Rankin Johnson trace the progress of the leading Kentuckian Confederate leader in the Civil War. After cavalry service in the commands of Nathan Bedford Forest and John Hunt Morgan, Johnson established his own reputation for innovation and audacity; for instance, he captured an Indiana town with only 12 men making fake cannons with stovepipe sections giving him the nickname "Stovepipe" Johnson. Authorized by the Confederate government to perate behind Union lines, Johnson's Tenth Kentucky Cavalry conducted numerous raids in western Kentucky and Tennessee. His Partisan Ranger Brigade used irregular but highly flexible operations to succeed with smaller forces. He was blinded from a wound in 1864 but moved to Texas where he founded the town of Marble Falls and became one of the states' most honored citizens. This volume has sketches, photographs, roster brigades, and much more. This copy has the bookplate of Texas Senator A.J. Wirtz who gave LBJ a helpful push in politics. (His daughter remained Lady Bird's best friend from days at the University of Texas). A fine copy bound in maroon cloth lettered and decorated in gilt, spine lettering gilt. Fine copies of this item are exceedingly rare. [Nevins, CWB, I, 113; Howes J122; Graff 2213; Jenkins, Basic Texas Books 108]. (Inventory #: 025984)
$750.00 add to cart or Buy Direct from
Alcuin Autographs
Share this item

The Course of Time, a Poem in Ten Books