Sketches of America; a Narrative of a Journey of Five thousand Miles Through the Eastern and western States of America: contained in Eight Reports.. 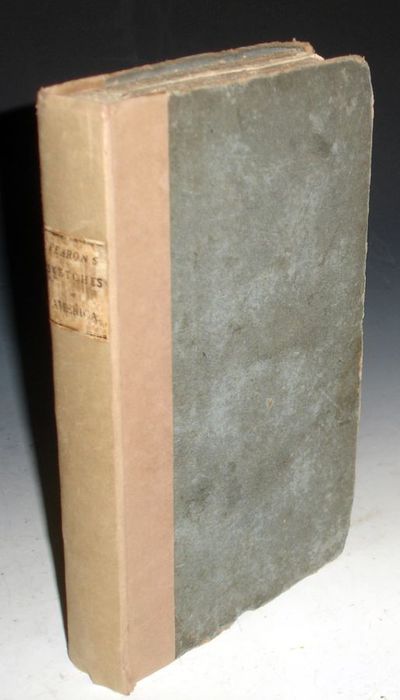 by Fearon, Henry Bradshaw
London: Longman, Hurst, Rees, Orme and Brown, 1818. Octavo. 454 pages. (Subtitle continues): ...."addressed to the thirty-nine English families by whom the author was deputed in June 1817, to ascertain whether any, and what part of the United States would be suitable for their residence." follows: "with remarks on Mr. Birkbeck's "notes" and "letters" He warned the would be investors that he had not seen good land, also noted the rudeness of Americans who did not know when to bow. He said his eyes were fatigued from all the unlimited forests (not knowing this was an important asset to development). He visits the Boston Athenaeum with its 18,000 volumes then sees an unnamed college four miles away (Harvard College) His visit to a black church speaks of the wild emotion which one member roared and ranted like a maniac, with his typical British anti-American bias he adds: "Had the inhabitants of Bedlam been let loose, they could not have exceeded it. As he speaks of disease, he says a Philadelphia woman at age 27 looked as old as a Londoner of age 40. There are accounts of whether the Illinois legislature will permit slavery (of course, it didn't ). His accounts of slave treatment and strict laws with punishments in New Orleans are long and detailed. He gives an account of the British invasion of Washington and leaving it in flames. One of the most readable though highly critical of Americans and their society. Details of prices on food, materials, etc. A remarkable work. Bound in original blue paper covered boards rebacked in tan paper, paper spine label, front blank had been repaired, a wide margined, uncut copy with text clean and bright, boards a bit rough around the edges, contemporary owner's name. [Howes F-65]. (Inventory #: 025978)
$300.00 add to cart or Buy Direct from
Alcuin Autographs
Share this item

The Course of Time, a Poem in Ten Books