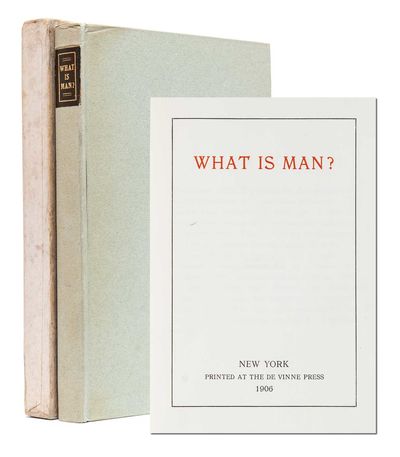 by [Twain, Mark]
New York: De Vinne Press, 1906. First Edition. Fine. Number 238 of a limited run of 250 numbered copies. Second issue, as usual, with p. 131 ending, "thinks about | it" (APG). Original blue-gray boards, morocco label, gilt, original box. A fresh, Fine copy in a slightly dusty box some of the joints neatly repaired. One of the major works of Twain's late years, here he sets forth his Deterministic philosophy using Socratic dialogue form. Twain originally published the work anonymously, even concealing his identity from the publisher. The author's earnest debate on the nature of man, free will and destiny. A work that influenced science fiction writer Isaac Asimov in his book, ". . . That Thou Art Mindful of Him" completing the biblical verse quoted by Twain for his title, Psalm 8-4. BAL 3490. Fine. (Inventory #: 2420)
$5000.00 add to cart or Buy Direct from
Whitmore Rare Books
Share this item