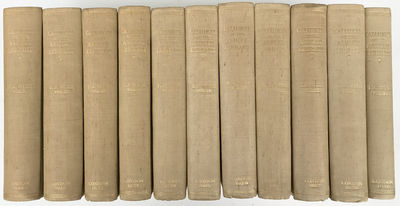 by WISE, Thomas James (1859-1937).
London:: Printed for private circulation . . . , 1922-36., 1922. 11 volumes. 4to. xiii, 267; xii, 214; xii, 209; xi, 213; x, 210; x, 218; xi, 220; xi, 208; xv, 332; xii, 224; xxiii, 200 pp. Photogravure frontispiece portraits, 179 plates, index, errata slip. Original gilt-stamped beveled-edged beige buckram, top edges gilt. INSCRIBED BY T. J. WISE TO ALICE MILLARD. Fine. LIMITED EDITION OF 50 COPIES PRINTED ON ENGLISH HAND-MADE PAPER BY THE DUNEDIN PRESS. This set is inscribed by the noted compiler-bibliophile, Thomas J. Wise, to Mrs. G. M. Millard, "with cordial regards . . . 19/7/1922". Rare complete set of this famous collection assembled by the revered and notorious collector, thief and forger, Thomas James Wise. The collection is now part of the British Library holdings. Even so, despite Wise's reputation, the collection was a monument to 19th century British literature and literary manuscripts. It is particularly strong in authors such as Ben Jonson, Shirley, Milton, Coleridge, Conrad, Ford, Davenport, Waller, Dryden, Pope, Gay, Wordsworth, Shelley, Keats, Byron, Tennyson, both Brownings, Arnold, the Brontës, Swinburne, Robert Lewis Stevenson, Thomas Hardy, etc., the Younger Romantics, the Pre-Raphaelites, pre-Restoration drama, etc. After his death, his widow sold the collection to the British Library. At that point, and because Wise's reputation was known by 1934, the collection copies were compared with the BL copies and the librarians found that 200 book leaves were missing and 89 of them turned up in the Wise collection. Henry Wrenn of the University of Texas, who had been building a collection there, found that 60 of the UT copies were completed with BL copy leaves, courtesy of Wise. / "One of the greatest frauds – not to say international conspiracies – in the history of book publishing is that involving Thomas J. Wise, the eminent bibliographer and book collector, friend of Rossetti, Swinburne, and other famous writers, in the forgery of rare first editions. Wise's own private collection, the Ashley Library, now in the British Museum, was one of the greatest private libraries in the world, and during the course of years he helped John Henry Wrenn, successful Chicago business man, build up in Americana almost equally rare collection (now at the University of Texas), interlarded though it was with Wise's forgeries." – Wrenn jacket note. / With the publication of John Carter and Graham Pollard, An Enquiry into the Nature of Certain 19th century Pamphlets, 1934, the outstanding disclosure was made that "T. J. Wise had forged more than 50 'first editions' of English authors and sold them, copy after copy, to wealthy book-collectors." / PROVENANCE: This is the Alice P. Millard (1873-1938) copy. She married George Madison Millard, a senior employee at the Chicago book shop of A. C. McClurg, was herself a famous Pasadena bookseller, catering to the wealthy elite, famously living in a Frank Lloyd Wright home that was built for her. See: Fannie E. Ratchford, (ed.), Letters of Thomas J. Wise to John Henry Wrenn . . . Knopf, 1944. EXTRA POSTAGE WILL APPLY. (Inventory #: B2952)
$2850.00 add to cart Available from
Jeff Weber Rare Books
Share this item

The Works of George Lord Lyttelton; formerly printed separately: and now first collected together, with some other pieces never before printed. Published by George Edward Ayscough, Esq.