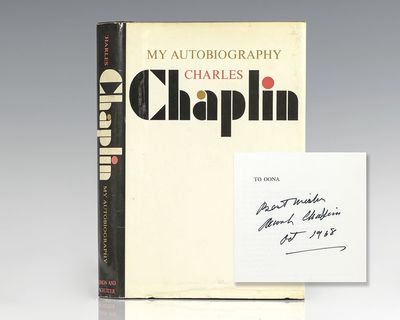 by Chaplin, Charles
New York: Simon & Schuster, 1964. First edition of "the best autobiography ever written by an actor. An astonishing work" (Chicago Tribune). Octavo, original cloth, illustrated. Signed by the author on the dedication page, "Best wishes Charles Chaplin Oct 1968." Fine in a near fine price-clipped dust jacket. Scarce signed. Chaplin's heartfelt and hilarious autobiography tells the story of his childhood, the challenge of identifying and perfecting his talent, his subsequent film career and worldwide celebrity. In this, one of the very first celebrity memoirs, Chaplin displays all the charms, peculiarities and deeply-held beliefs that made him such an endearing and lasting character. Take this unforgettable journey with the man George Bernard Shaw called "the only genius to come out of the movie industry" as he moves from his impoverished South London childhood to the heights of Hollywood wealth and fame; from the McCarthy-era investigations to his founding of United Artists to his "reverse migration" back to Europe, My Autobiography is a reading experience not to be missed. (Inventory #: 92368)
$2750.00 add to cart or Buy Direct from
Raptis Rare Books
Share this item