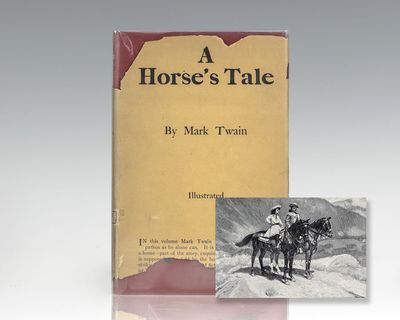 by Twain, Mark (Samuel L. Clemens)
New York: Harper & Brothers Publishers, 1907. First edition of this story told in part from the perspective of a horse. Octavo, original cloth, illustrated, frontispiece, tissue guard. Near fine in the rare original dust jacket with large chips and wear. Illustrated by Lucius Hitchcock. A Horse's Tale was originally published in two installments by Harper's Magazine in 1906. Clemens's own daughter, Susy Clemens, who died in 1896 at the age of 24 from meningitis, is understood to be the inspiration for the main character Cathy Alison. (Inventory #: 85732)
$550.00 add to cart or Buy Direct from
Raptis Rare Books
Share this item