The Extended Phenotype: The Gene as the Unit of Selection. 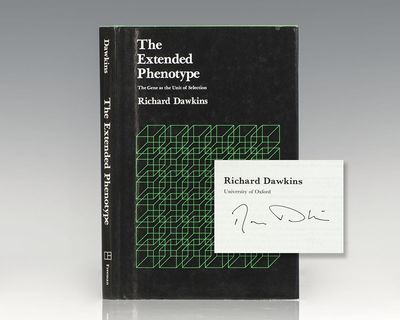 by Dawkins, Richard
Oxford: W.H. Freeman and Company, 1982. First edition of Dawkins' sequel to The Selfish Gene, and is considered his principal contribution to evolutionary theory. Octavo, original green cloth. Signed by Richard Dawkins on the title page. Fine in a fine dust jacket. Jacket design by Perry Smith. The sequel to The Selfish Gene, The Extended Phenotype was praised as "an excellent illustration of why the study of evolution is in such an exciting ferment these days" (Science). Dawkins writes "so clearly it could be understood by anyone prepared to make the effort" (London Review of Books), and this ease and facility in writing has entitled Dawkins as "a genius of science popularization" (The Times). Douglas Adams considered him "our most radical Darwinian thinker, [he] is also our best science writer." (Inventory #: 89548)
$2500.00 add to cart or Buy Direct from
Raptis Rare Books
Share this item