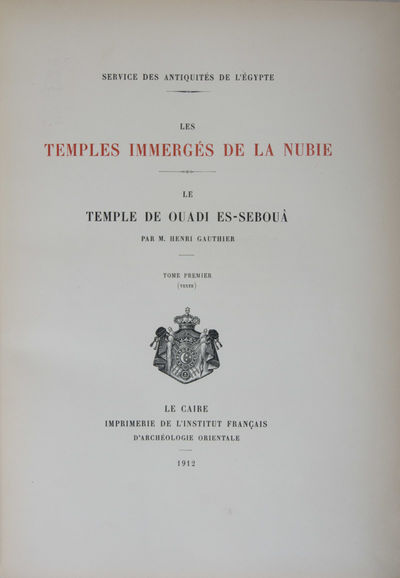 by Gauthier, Henri
Le Caire: Imprimerie de l'Institut Français d'Archéologie Orientale, 1912. First edition. Hardcover. g+ to vg. Folio (13 1/2 x 10"). [4], xliii, [1], 248pp (Text) (Vol. 1), 8pp (Text), lxvi (66), + A-T leaves (Plates) (Vol. 2). Modern green cloth library binding, with gold lettering to spine. Title pages in red and black lettering. Henri Gauthier's work on the inscriptions of the Nubia Temple of Ouadi Es-Sebouâ (Wadi es-Sebua*) is lavishly illustrated with no less than 85 illustrated and photographic plates reproduced in phototype.Minor shelf wear. Ex-library copy with stickers at tail of spine and upper front joint, with bookplate on inside of front cover, pocket on inside of back cover, and stamps at top and lower paper edges. Minor age-toning throughout. Text in French. Binding in overall good+ to very good, interior in very good condition. * Wadi es-Sebua, or Valley of the Lions (so-called because of the sphinx-lined approach to the temple forecourts) is the site of two New Kingdom Egyptian temples, including one speos temple constructed by the 19th dynasty Pharaoh Ramesses II, in Lower Nubia. The first temple was built by the 18th dynasty Pharaoh Amenhotep III and subsequently restored by Ramesses II. In its first stage, this temple "consisted of a rock-cut sanctuary fronted by a brick-built pylon, a court and a hall, partly painted with wall paintings." The temple was perhaps dedicated to one of the local Nubian forms of Horus, but his representations were altered to Amun at a later point in time. During the Amarna period, images of Amun were attacked and the decorations deteriorated but Ramesses II later restored and extended Amenhotep III's temple by building structures in front of the pylon. (For more information, see: Richard H. Wilkinson's "The Complete Temples of Ancient Egypt," (2003), Thames & Hudson). (Inventory #: 44477)
$275.00 add to cart or Buy Direct from
Eric Chaim Kline Bookseller
Share this item