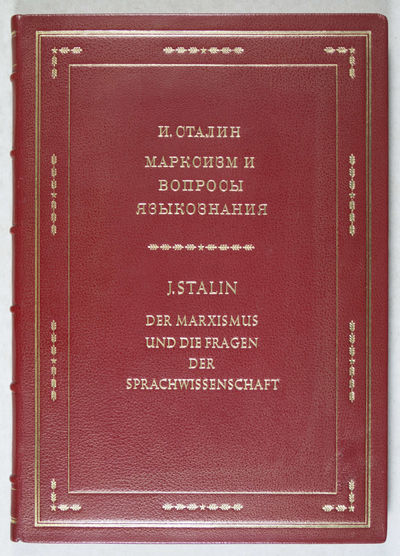 by Stalin, J. W.
Berlin: Dietz Verlag, 1952. Limited edition. Hardcover. g+ to fine. 8/30. 91 (4)pp. Full red hand bound morocco with staggered gilt borders encasing gilt-stamped frame of laurel and stars, with gilt lettering on front cover. Same framing without lettering on back cover. The spine also with staggered gilt-stamped ruling and stars at top and bottom, with six raised bands and gilt-stamped doublures on inside covers. Housed in slightly textured paper-covered, cloth-lined slipcase. German Deluxe Edition (Vorzugsausgabe) published on the occasion of Josef Wissarinowitsch Stalin's 73rd birthday, set in Russian Excelsior- and Trajanus-Antiqua, printed on German handmade paper. Designed and printed by the People's Enterprise Offizin Haag-Drugulin in Leipzig. Text in Russian and German printed to facing pages.In this series of essays Stalin deals with the phenomenon of language. He criticizes bureaucratic trends and tendencies in the Sovjet Union as well as the "Faith in Authority" as a bourgeois trait and the "Cult of personality," etc. This translation of Stalin's essays furthered the discussion of the original Russian linguistics debate on the relativity of politics and science taking place in the GDR (German Democratic Republic) linguistics of the 1950s.The German text is a translation by the Marx-Engels-Lenin Institute at the ZK (Central Committee) of the SED containing the essays of J. W. Stalin on philology (linguistics). Originally published 1950 in Moscow under the Title "Marxism and the Question of Linguistics," it includes Stalin's essays On Marxism in Linguistics, Answers for Comrade J. Krascheninnikowa, and Answers for Comrades. Praised as a new level in the development of linguistics by the Marx-Engels-Lenin Institute, representing the key to a true Marxist solution to problems in linguistics and therefore are an enhancement and enrichment of Marxism-Leninism. Slipcase with light wear, small chip at tail of spine and lightly rubbed at foredge. Offsetting from doublures on free endpapers. Bottom and foredge of block uncut. Slipcase in overall very good, binding and interior in fine condition. (Inventory #: 44428)
$2250.00 add to cart or Buy Direct from
Eric Chaim Kline Bookseller
Share this item