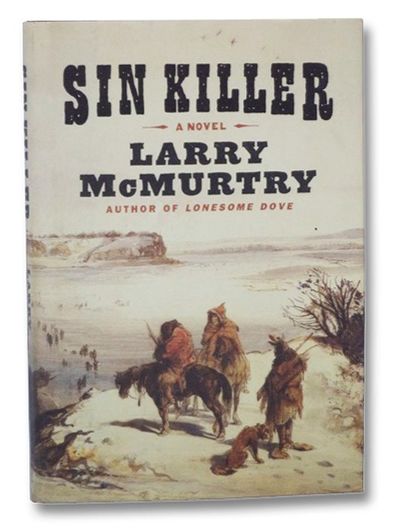 by McMurtry, Larry
Simon and Schuster, 2002. First Edition. Hard Cover. Very Good/Very Good. First edition. Top edge faintly foxed, a couple small spots on jacket reverse. 2002 Hard Cover. We have more books available by this author!. 300 pp. "Larry McMurtry's Sin Killer, the first novel of a major four-volume work, is set in the West when it was still unexplored, with a rich, brilliant cast of characters, their lives as intertwined and memorable as those of Lonesome Dove, a work that is at once literature and great entertainment. It is 1830, and the Berrybender family, rich, aristocratic, English, and fiercely out of place, is on its way up the Missouri River to see the American West as it begins to open up. Accompanied by a large and varied collection of retainers, Lord and Lady Berrybender have abandoned their palatial home in England to explore the frontier and to broaden the horizons of their children, who include Tasmin, a budding young woman of grit, beauty, and determination, her vivacious and difficult sister, and her brother. As they journey by rough stages up the Missouri River, they meet with all the dangers, difficulties, temptations, and awesome natural scenery of the untamed West, as well as a cast of characters including Indians, pioneers, mountain men, and explorers, both historical and imaginary, and with as many adventures as Gus and Call faced in Lonesome Dove. At the very core of the book is Tasmin's fast-developing relationship with Jim Snow, frontiersman, ferocious Indian fighter, and part-time preacher (known up and down the Missouri as "the Sin Killer"), the strong, handsome, silent Westerner who eventually captures her heart, despite the fact that they are two intensely strong-willed people, from very different backgrounds. Against the immense backdrop of the American West, still almost (but not quite) unspoiled, Larry McMurtry has created a wonderfully engaging family confronting every bigger-than-life personality of the frontier, from the painter George Catlin to Indian chiefs, beaver trappers, mountain men, and European aristocrats and adventurers, as they make their way up the great river, surviving attacks, discomfort, savage weather, and natural disaster. Sin Killer is a great adventure story full of incident, suspense, and excitement, from a buffalo stampede to an Indian raid, coupled with a charmingly unlikely love story between a headstrong and aristocratic young Englishwoman and a stubborn, shy, and very American product of the West, in the person of Jim Snow. At once epic, comic, and as big as the West itself, it is the kind of novel that only Larry McMurtry can write. (Inventory #: 2274137)
$8.00 add to cart or Buy Direct from
Yesterday's Muse
Share this item
Yesterday's Muse, Inc.
Offered by

A Chapter of Erie

O-Neh-Da Te-Car-Ne-O-Di; or Up and Down the Hemlock. Including History, Commerce, Accidents, Incidents, Guide, Etc