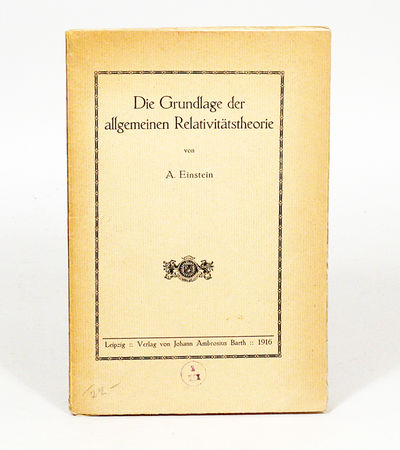 by EINSTEIN, ALBERT
Leipzig: Barth, 1916. FIRST EDITION. Original Wrappers. Very Good. FIRST EDITION, monograph issue in original wrappers, of Einstein's General Theory of Relativity. PMM 408. Einstein's General Theory of Relativity is a continuation and dramatic expansion of some of the ground-breaking ideas set forth in his 1905 paper on special relativity. Specifically, with general relativity, Einstein applied his revolutionary conceptions of time, space, and matter to all of the universe, and providing, for the first time the definitive reinterpretation of the Newtonian model.    "Whereas Special Relativity had brought under one set of laws the electromagnetic world of Maxwell and Newtonian mechanics as far as they applied to bodies in uniform relative motion, the General Theory did the same thing for bodies with the accelerated relative motion epitomized in the acceleration of gravity. But first it had been necessary for Einstein to develop the true nature of gravity from his principle of equivalence ... Basically, he proposed that gravity was a function of matter itself and that its effects were transmitted between contiguous portions of space-time ... Where matter exists, so does energy; the greater the mass of matter involved, the greater the effect of the energy which can be transmitted. In addition, gravity affected light ... exactly as it affected material particles. Thus the universe which Newton had seen, and for which he had constructed his apparently impeccable mechanical laws, was not the real universe ... Einstein's paper gave not only a corrected picture of the universe but also a fresh set of mathematical laws by which its details could be described" (R.W. Clark, Einstein). "This separate [monograph] edition is printed on good, strong paper, the wrappers are of strong material too and it is described now as 'the original edition' of this classic paper" (Weil 80a.)   Leipzig: Barth, 1916. Octavo, original wrappers; custom box. Small split to wrappers at base of spine; neat circular numerical stamp on front wrapper and title. Only a hint of toning to wrappers edges, much less than usual. Rare in such good condition. (Inventory #: 2143)
$7500.00 add to cart or Buy Direct from
Manhattan Rare Book Company
Share this item
Manhattan Rare Book Company
Offered by