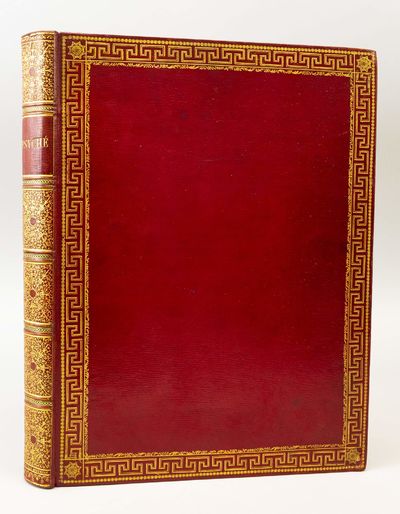 by (BINDINGS - BOZERIAN). (FRENCH ILLUSTRATED BOOKS). LA FONTAINE, [JEAN DE]
Paris: Didot le jeune, l'An Troisième, [1795]. A Large Paper Copy. 350 x 255 mm. (13 3/4 x 10 1/8"). 4 p.l., 234 pp. A Large Paper Copy. STATELY RED STRAIGHT-GRAIN MOROCCO BY JEAN-CLAUDE BOZERIAN (stamp-signed at foot of spine), covers with a Greek key frame (Culot, roll #22), starburst (Culot tool #14) cornerpieces, raised bands with inlaid strip of black morocco, spine densely gilt in the binder's distinctive "mille étoiles et points" style, gilt titling, gilt-rolled turn-ins, pale blue watered silk endleaves with gilt laurel wreath roll (Culot #40), all edges gilt. With engraved frontispiece portrait by Audouin after Hyacinthe Rigaud and EIGHT LOVELY PLATES BY MOREAU LE JEUNE, engraved under his direction by Dambrun, Duhamel, Dupréel, Ghendt, Halbou, Petit, and Simonet, all with tissue guards and ALL BEFORE LETTERS. Ray 56; Cohen-de Ricci 583. For the binding: Culot, "Jean-Claude Bozerian." Small abrasion to rear board (expertly masked with dye), lower corners slightly bumped, minor soiling to covers, isolated mild marginal smudges or faint freckled foxing to plate margins, otherwise A SUPERB COPY, clean, fresh, and bright, with enormous margins, rich impressions of the engravings, and an extremely well-preserved binding with glittering decoration. This splendid large-format production combines the talents of a leading illustrator, leading printer, and leading binder of late 18th century France with content by one of the nation's most beloved writers. La Fontaine (1621-95) is best known for his "Fables," considered one of the masterpieces of French literature, but his retelling of Apuleius' classic story of the obstacles faced by the god of love and his mortal wife is lauded by Britannica for "the lucid elegance of its prose, its skillful blend of delicate feeling and witty banter, and some sly studies of feminine psychology." Jean-Michel Moreau, known as Moreau le jeune (1741-1814), is deemed by no less than Gordon Ray to be "the greatest name among French illustrators of the 18th century." Ray points to this volume as evidence that "the making of fine books continued after the Revolution." The engravings here show the influence of the artist's time spent in Italy, studying classical and Renaissance art, and mark a departure from his more Rococo style. Lavish and elegant, this lovely binding is a typical specimen from the Bozerian atelier, notable for both its technical precision and aesthetic feeling. The volume is wonderfully refined in the way it combines restraint and opulence, being at once animated, graceful, and polished. A special feature here is the gilt-embellished silk endleaves that the Parisian binders were among the first to introduce--a luxurious touch for their discriminating clientele. Our binding is the work of Jean-Claude Bozerian (1762-1840), the elder of the Bozerian brothers (François is referred to as "le jeune"), who was active in Paris from 1795 to 1810. He began his career in Lyon as an apprentice bookseller, printer, and bookbinder, eventually deciding to focus on the latter craft. Marriage to the widow of binder Pierre Boulier allowed him to establish a binding workshop in Paris, where he was joined by his brother. His bindings were soon much in demand by French bibliophiles, who appreciated their superior materials, design, and execution. His work often enhances publications from the great house of Didot, his neighbor on the Quai des Augustins and a printer he much admired for his typography, book designs, and high quality papers. Unusually for the time, Jean-Claude often signed his work, most often at the tail of the spine, as here. A rich man by age 50, he decided to retire and enjoy his leisure, turning his business over to his nephew Lefebvre. (Inventory #: ST14364)
$6760.00 add to cart or Buy Direct from
Phillip J. Pirages Fine Books
Share this item