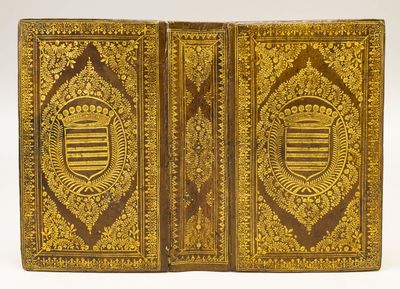 by (EMBLEM BOOK). ALCIATI, ANDREA
Lvgdvni: Apud Hæredes Gulielmi Rouillii [Guillaume Rouille], 1614. 182 x 110 mm. (7 1/4 x 4 1/2"). 20 p.l., 816 pp., [12] leaves.Edited by Claude Mignault. IN A SUPERB CONTEMPORARY CALF BINDING, LAVISHLY GILT, panelled covers framed with double gilt rules, elaborate massed floral sprays and pointillé roll enclosing a central mandorla with similar floral and foliate tooling nearly filling the central panel, an oval at the very center enclosing an armorial centerpiece comprising a crown above a shield with six azured horizontal bars, the coat of arms of the Comte de Bélin (see below), flat spine panelled with gilt fillets and decorative rolls, and with massed gilt foliate sprays in the center panel, all edges gilt. Printer's device on title page, woodcut headpieces, tailpieces, and initials, 14 woodcuts of trees, and 197 EMBLEMATIC WOODCUT ILLUSTRATIONS. Title page printed in red and black. Front flyleaf with long inscription indicating that this volume was given as a prize for first place in Greek oratory to Pierre Pépin, the inscription dated 1622 and signed by Blasius Chaudesolle, prefect of the Jesuit College of La Flèche, and accompanied by the school's embossed wax seal. Front pastedown with 19th century bookplate of Thomas Powell, front free endpaper with modern bookplate of "TM." Landwehr (Romanic) 94; Duplessis 73. Joints very slightly flaked, rear joint with small area of worming, a few minor abrasions and insignificant stains to covers, but A LOVELY ORIGINAL BINDING IN AN IMPRESSIVE STATE OF PRESERVATION. Five-line discoloration at center of four leaves (the result of an owner's attempt to obscure with ink the genitals of the three Graces), light browning and foxing in much of the text, last 50 leaves with small faint dampstain in upper margin and first few lines of text, one marginal paper flaw just entering text (slight displacement of letters, but no loss), otherwise an excellent copy internally, the leaves still rather fresh, and with pleasing impressions of most of the charming woodcuts. This is a fine representative example of the emblem book at its highest point of popularity, from a publishing house known for its editions of emblematic literature, offered here in a presentation binding with the arms of a French nobleman. The combination of allegorical pictures and epigrams that became known as an "emblem book" was popularized by the Milanese jurist Andrea Alciati (1492-1550), who established the format for the genre: each emblem appeared on a separate page, with title or motto and image, and a text explanation below. Emblem books combined images and text to teach a moral truth in such a way that the reader's memory would grasp it, not as a formula, but as a genuine experience that would serve as an effective guide to understanding and conduct. This singular category of illustrated books exerted a strong influence on both contemporary literature and the fine arts. French lexicographer Jean-Pierre Nicéron remarked that a person's education was not complete unless he knew Alciati in this version edited by esteemed scholar Claude Mignault, which first appeared in 1571. Alciati's first book had been printed in 1531 by Chrestien Wechel in Augsburg, but by the 1540s, the main production of emblem books had shifted to Lyon, where Guillaume Rouille, Jean de Tournes, and Macé Bonhomme produced competing editions. The animated series of woodcuts appearing here was produced for our printer Rouille in 1548 by Pierre Eskrich to compete with those cuts designed by Bernard Salomon for his rival, Jean de Tournes. The fully realized scenes are frequently full of action and include many charming and revealing details, not only of mythic narrative, but also of contemporaneous costume, architecture, and the events and accoutrements of daily living. Guigard believes that the arms on our binding were those of François de Faudoas d'Averton, comte de Bélin and governor of Ham, Paris, and Calais, who was knighted in 1598; Olivier disagrees, although he says that the arms are certainly those of the d'Averton family. In any case, the inscription of the prefect who awarded this volume as a prize mentions the "generosity and munificence of the Comte de Bélin. (Inventory #: ST14248)
$7800.00 add to cart or Buy Direct from
Phillip J. Pirages Fine Books
Share this item